Hungary stand between Wales and a place in Euro 2020 finals 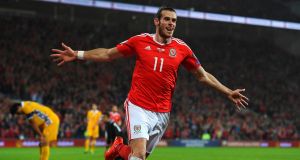 Gareth Bale: “Whenever I play I just always try to give 100 per cent, whether I am scoring or defending.” Photograph: Stu Forster/Getty Images

Gareth Bale has said Wales’s attacking armoury is stronger than when they reached the Euro 2016 semi-finals and denied there is aburden on him to help his country to a third major tournament. Bale played 60 minutes as Wales beat Azerbaijan on Saturday and will start against Hungary in Cardiff on Tuesday, when victory would secure automatic passage to Euro 2020.

Bale, who last week admitted he prefers playing for Wales than for Real Madrid, was his country’s top scorer in the previous European qualifying campaign and remains the nation’s talisman but the Wigan striker Kieffer Moore and Harry Wilson, the Liverpool winger on loan at Bournemouth, found the net in Baku and the emergence of Daniel James has also helped share the load.

“Maybe now we’ve got more attacking options, which is good,” Bale said. “To qualify is the main goal, and you can’t qualify with one player. It’s a big team effort and it’s good that we’re all chipping in and working for each other.

“Kieffer has come in and done a fantastic job; he’s that out-ball for us now, he’s someone who can hold the ball up and someone we can play off. We have more options which is good for us as a team, but he’s done fantastic for us since coming in. He’s got a couple of important goals for us and hopefully he can carry on that vein of form and we can qualify.

“I don’t really feel the pressure too much. Whenever I play I just always try to give 100 per cent, whether I am scoring or defending. If I manage to score more goals than others then good; if I don’t then hopefully someone else is scoring them. I just try and do the best for the team and whether I score or not and as long as win - as I’ve always said - is the most important thing.”

Bale said Wales could use the highs and lows from recent experiences to their advantage, notably reaching the Euros in France three years ago and narrowly missing out on a World Cup play-off spot to the Republic of Ireland a year later.

“We have got the kind of euphoria of qualifying for our first Euros and doing so well at the competition that we really want to do that again,” he said. “We’ve also got the negatives of knowing how it feels to miss out on qualifying for a tournament like we did the World Cup, so we can use both of them to our advantage. We will be using all of our experience to try and navigate our way through.”

Bale was withdrawn as planned against Azerbaijan and replaced by Aaron Ramsey, whom Giggs said was fit to start against Hungary. Joe Allen is expected to return to the midfield following a one-match ban, in place of the Bristol City midfielder Joe Morrell, while Chelsea’s Ethan Ampadu will likely retain his place.

“You have to weigh up all the situations and go with what feels right,” said Giggs. “We’re in good form, we’ve gathered some momentum but it does not count for anything if you do not finish the job off. We needed favours, we got that [by Slovakia losing in Croatia] and now we need to capitalise. It’s in our hands.”

Giggs continued: “We’ve got some good players but we recognise we are up against a team that are organised, tough to break down and need to win (to qualify0 as well. We have to show the belief and quality that we’ve shown and be brave on the ball. It’s going to be an exciting night and one the players are looking forward to.” - Guardian

Mercedes’ Wolff hails Hamilton after his record win in Portugal 18:41
Alisson: ‘I believe my faith and working hard helped me in this fast recovery’ 18:21
Gibson-Park, Earls and Kelleher all in race to make Ireland’s French finale 17:24
Champers Elysees to skip Breeders’ Cup with Royal Ascot next year’s target 16:03
Peter O’Mahony ready to battle his way back into Ireland’s backrow 15:46

1 Seán O’Brien: Anger over my parents’ break-up never left me
2 Madness or defiance? The GAA is taking a huge gamble in staging Championships
3 Peter O’Mahony ready to battle his way back into Ireland’s backrow
4 Ireland 50 Italy 17: Ireland player ratings
5 Gibson-Park, Earls and Kelleher all in race to make Ireland’s French finale
Real news has value SUBSCRIBE
Crossword Get access to over 6,000 interactive crosswords