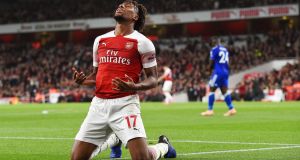 Arsenal’s Alex Iwobi has joined Everton in a deal that could be worth up to €38 million. Photograph: Andy Rain/EPA

Everton completed the late transfer of Alex Iwobi from Arsenal more than two hours after the transfer window closed on Thursday night having refused to meet Crystal Palace’s £100 million valuation of Wilfried Zaha.

Iwobi is Everton’s seventh summer arrival and has signed a five-year contract with the Goodison Park club, with the fee for the Nigeria international which could reach £35 million (€38 million) ensuring the Premier League set a new spending record of more than £1.4 billion (€1.5 billion).

Everton switched their sights to Iwobi late in the transfer window having been frustrated in their long-running attempt to seal a club record deal for Zaha. The manager, Marco Silva, was determined to inject more pace into his attack this summer but Everton and Palace were poles apart in their valuation of the Ivory Coast forward.

Palace rejected a £52 million bid from Everton on July 28th with Zaha’s suitors later issuing a statement claiming that was “the end of the matter”. Everton maintained their interest, however, and discussed an improved offer during negotiations over James McCarthy’s £3 million move to Selhurst Park. They were prepared to pay up to £60 million for Zaha, who turns 27 in November, but did not submit a formal second offer given Palace’s hardline stance.

Steve Parish, the Palace chairman, insisted it would take £100 million to secure Zaha and the club’s resolve not to sell hardened when Ismaila Sarr, a possible replacement, joined Watford from Rennes on deadline day. Everton, who had a £30 million bid for Iwobi rejected by Arsenal on Wednesday, then intensified efforts to secure their alternative option.

While Silva ultimately added to Iwobi plus Moise Kean to his forward line Everton were unable to address his other priority in central defence.

A move for Marcos Rojo was explored on deadline day but Everton were only interested in a loan deal for the Manchester United defender given his age and injury record. United would only consider a permanent exit for Rojo, however, and negotiations quickly broke down.

Zaha’s failure to secure a transfer away from Selhurst Park came after the Ivory Coast forward submitted a transfer request on Wednesday but the manager, Roy Hodgson, admitted he was pleased to have retained his services.

Asked whether he had any worries about integrating the forward back into the team, Hodgson said: “Everyone here has a good relationship with him. There’s not a problem with that. His beef is with the chairman and owners of the club because he’s wanted to leave and they haven’t received the offer that they think is sufficient to allow him to leave. He has to come to terms with that, when you sign long-term contracts you are expected to honour them and we expect him to do that.”

There was also a frantic end to the window at Leicester, who signed the Belgium midfielder Dennis Praet after the official deadline for £18 million. That helped to surpass the record figure set in the summer of 2017, with promoted Aston Villa the highest net spenders on £137 million and Chelsea – who are under operating under a transfer ban – posting a net profit of £72.6 million after the sales of Eden Hazard to Real Madrid and David Luiz to Arsenal. – Guardian