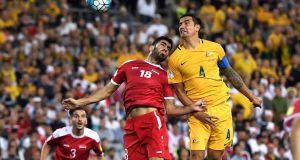 Syria’s dreams of a World Cup debut were dashed by Tim Cahill’s aerial prowess as Australia’s record goalscorer converted an extra-time header — his second of the match — to put his side into a play-off.

The Melbourne City midfielder’s 50th international goal came in the 109th minute to finally break the resilience of their opponents, who were reduced to 10 men in the first additional period.

Syria’s fairy tale looked like continuing when Omar Al Soma struck in only the sixth minute to give the war-torn nation a 2-1 aggregate lead at the ANZ Stadium in Sydney.

But Cahill soon equalised with a trademark header and, despite some resilient defending, he scored the winner with 11 minutes to go to book their place in the intercontinental play-off against the fourth-placed CONCACAF side, which will be either Panama or Honduras.

Syria, gripped by civil war for six years, were missing five key players but that did not seem to impede their start as they went ahead when Tamer Mohamd dispossessed Mark Milligan to counter-attack and set up Al Soma to shoot high past Maty Ryan.

It was their one bright spot in a half of almost total domination by the hosts, who although enjoying 80 per cent possession could not capitalise.

The introduction of Huddersfield midfielder Aaron Mooy, surprisingly left out of the team, after just 11 minutes because of injury to Bournemouth defender Brad Smith prompted a change in formation but led to almost one-way traffic.

Matthew Leckie, whose inviting right-wing cross was converted by Cahill, saw a close-range effort on the half-hour blocked by Zaher Medane as Syria’s defence held on.

Early in the second half Leckie powered a header wide before Ibrahim Alma saved well at his left-hand post to deny Celtic midfielder Tom Rogic, whose deflected shot wide in the 90th minute was their last chance before extra-time.

Syria continued to hang on — their task was made more difficult by the dismissal of Mahmoud Al Mawas for a second yellow card — and Alma brilliantly tipped over Nikita Rukavytsya’s near-post volley at the end of the first period.

But despite getting his hand to the ball, the goalkeeper could not keep out Cahill’s second header in the 109th minute.

There was still time for one dramatic twist when Al Soma lined up a 30-yard free-kick in added time but his shot crashed against the post with the goalkeeper beaten.