British media reaction: ‘Ireland won’t light up Russia as Wales did in France’ 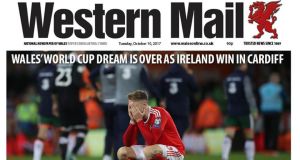 This was supposed to be a coronation for a ‘golden generation’ of Welsh footballers. The round ball revolution in a country so dominated by rugby was supposed to take the next step of World Cup qualification after reaching the semi-finals of the European Championships last year.

But then up stepped James McClean and Welsh hopes were dashed.

“Wales World Cup dream is over as Ireland win in Cardiff” says the front page of the Western Mail.

“Wales saw their World Cup dreams come to a gut-wrenching end after slumping to 1-0 defeat at the hands of Group rivals Ireland in Cardiff,” writes Tom Coleman in his match report.

The tone of the media reaction is largely one of acceptance – that Ireland came to do a job and Wales didn’t show quite enough attacking verve to ever really trouble Darren Randolph.

“Ireland predictably parked the bus after that [McClean’s] strike, although striker Daryl Murphy was perhaps lucky not to see red after appearing to strike the face of Ramsey,” continues Coleman.

Also writing in the Western Mail, Chris Wathan says that, despite the devastation, the future is still bright for this Welsh team and their legions of fans.

“The night had begun with an anthem to stir the soul.

“With ten minutes remaining, it was heard again. Only this time, it felt one more of resignation, of acceptance that this time wasn’t our time. That next summer, Wales won’t be at the World Cup,” he writes.

However, the chief football writer doesn’t miss the chance to dismiss Ireland’s chances at next year’s World Cup – should we get there.

“It will jar those from the Red Wall who will watch them there. They know they are not a better side, that they won’t light up Russia if they make it there as Wales had done in France.”

He continues: “The only defeat of the campaign – the only time they had been behind even – was the one that mattered most, that hurt most. As the final whistle blew, perhaps the Irish couldn’t have believed their luck.”

Attention now turns to Chris Coleman’s future on which the manager is undecided. One thing for certain is that the feeling of the vast majority in Wales is that it is his decision and most would be happy with him staying on.

“I can’t say right now about my future because I’m not thinking about it,” Coleman said after the game.

“I’m thinking how I’ve got a dressing room of devastated players and staff and the whole nation is mourning because that elusive World Cup has passed us by.

“It’s not just a matter of me signing a contract. The FAW have been great with me, they’ve left me alone when I asked them to leave me alone and they’ve been brilliant.

“There will be a conversation now, there’s a friendly next month and my contract is until the summer but we’ll see. Now I’ll go back to my family and friends and take a bit of time. When the dust settles, we’ll see where we’re going.”

In his match report for the Guardian, Daniel Taylor pinpoints the absence of Gareth Bale as the key factor for a Wales side that ran “out of ideas.”

“Gareth Bale, like Ryan Giggs, Ian Rush and all those others, will just have to wonder when, if ever, that chance will come and, boy, did Wales miss their most celebrated player during that jarring, nerve-shredding finale when they seemed to run out of ideas and Tom Lawrence, with one last free-kick to drop into the penalty area, let the nerves get the better of him,” he writes.

“It was typical Irish glory, using all the traits that have helped them on their most illuminating nights, with unlikely heroes such as Shane Duffy and David Meyler, and the Group D permutations always meant one team had to drop out.”

Also in the Guardian, Stuart James says that “Republic of Ireland’s fans were outnumbered by 10 to one, but injury to Joe Allen and a goal from James McClean ensured the volume was turned down on Wales.”

He continues: “O’Neill was spot-on when he said that nobody will want to face them when the draw is made next week. Ireland, as Wales can ruefully testify, are a team to avoid.”

In the Telegraph, Jeremy Wilson also heaps praise on O’Neill and says that, although Ireland lack quality, they make up for it in organisation and sheer character.

“The Republic of Ireland will instead go into the World Cup play-offs next month after a tactical master-class from Martin O’Neill first contained a barrage of early Welsh pressure and then saw his team pounce clinically to seize their chance,” he writes.

“Wales and the Republic both work off the back of a paucity of resources and both have achieved much under their current managers over the last two or three years,” writes Ian Ladyman in the Daily Mail.

“O’Neill is the one to move forward and Wales’ Chris Coleman must now decide whether to stay where he is or return to club football.

“The Irish defence held out and the celebrations that followed were worth watching.

If O’Neill’s team do make it to Russia, the chances are that half of the Republic will go with them.”

And, with it, light up Russia like they did in France.

1 French new wave stay on course for Grand Slam
2 England v Ireland preview: Ireland’s revival to face its sternest test
3 Regimented life second nature to top Cat Murphy
4 Jack O’Connor snatches the points for Wexford
5 Devin Toner: it ‘means the world’ to be back in the Ireland side
Real news has value SUBSCRIBE
Crossword Get access to over 6,000 interactive crosswords