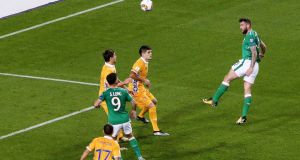 Had a predictably quiet time of it but the one time he was called upon, he pulled off the save of the night to keep out a sweet Platica volley that was headed for the top corner. Rating: 7

Always willing when he went raiding down the right flank but his deliveries were low enough on quality, even though he generally had the beating of his man. Rating: 5

Had little enough defending to do and always looked comfortable doing it. Had one chance to get on the scoresheet himself but headed it wide in the first half. Rating: 7

Much the same as Clark, albeit a little sloppier in possession. Made a nuisance of himself for the first goal but couldn’t stretch his neck for the one chance that came his way. Rating: 6

Made himself busy down the left flank. Took advantage of the spare acre of space to cross for Murphy’s second goal and in general looked markedly more positive than usual. Rating: 7

In a game that was there for whatever midfielder fancied taking a hold of it, he didn’t do very much beyond the basics. Made few mistakes, took few risks. Did fine. Rating: 6

Great covering to snuff out an early Moldovan break and basically bossed the game from there. Shielded the back four with authority, one short backpass to Randolph apart. Rating: 7

As always, everything good went through him. Reliably tidy at close quarters and spread the play with delectable ball to Ward for Murphy’s second goal. Must play on Monday. Rating: 8

Showed some promising touches here and there and a level of confidence in possession not always obvious in Ireland players. Little enough attacking thrust, it must be said. Rating: 6

Hopefully saving the goals for Monday. Fluffed two sitters in the first half and missed an open goal on the hour. Never stopped running but a rotten night in front of goal. Rating: 4

Put the game out of Moldova’s reach early on, arguably with his first goal but definitely with his second. Had a bit to do for both of them, especially the forcefully-headed second. Rating: 7

The game was over when Aiden McGeady, Harry Arter and Seán Maguire came on. Outside of the goals, Maguire’s introduction got the biggest cheer of the night. Rating: 6

Can’t ask for much more. Chose well, going with two big men up top and leaving room for Wes Hoolahan to make merry in behind. Could maybe have taken Wes off a bit earlier if he has him in mind for Wales. Rating: 7

1 Six Nations: Ireland v England all you need to know guide
2 Owen Doyle: Day of the jackal may be coming to an end
3 Andy Farrell ticking all the boxes in advance of England showdown
4 Ireland wary of Peyper calling the tune as they head for Twickenham
5 David Brady says he's witnessed illegal payments of GAA managers
Real news has value SUBSCRIBE
Crossword Get access to over 6,000 interactive crosswords