Harry Arter: We always rise to the big occasions

Meanwhile, Daryl Murphy is enjoying his new lease of life in the twilight of his career 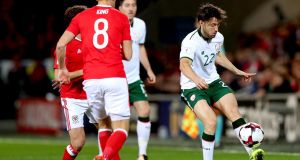 Harry Arter has saluted his Republic of Ireland team-mates for getting it right on the night once again to preserve their World Cup dream.

Just as they did when world champions Germany arrived in Dublin in October 2015 to keep their Euro 2016 qualification hopes alive, and again when they needed to beat Italy to make it to the knockout stage in France, the Republic delivered with perfect timing in Cardiff on Monday.

A 1-0 win saw Ireland leapfrog opponents Wales into second place in Group D and clinch a place in November’s play-offs.

Bournemouth midfielder Arter said: “That’s one thing I feel the group is good at. I look at the Euros and the result against Italy sticks out, and you take confidence from performances like that.

“When the big occasions come — Germany at home last year — we rise to the occasion. One thing that we’ll probably be kicking ourselves about is looking at some of the games in the group that we could have got a result in.

“But ultimately we came here against Wales, who needed the same thing against us, and it was a tight game, but our determination got us there.

“It’s what this group is made of. We are fighters. We might not be blessed with superstars like other nations, but we have got the togetherness and the willingness to get results, and that’s what pulled us through.”

Handed a start as manager Martin O’Neill implemented a specific game-plan, Arter was asked to provide energy and impetus in the middle of the field, and he played a significant role in James McClean’s winner when he dummied Jeff Hendrick’s pull-back to leave the West Brom man with time and space to pull the trigger.

However, he later revealed not all of his team-mates were convinced he had been quite as astute as it appeared.

Arter said with a smile: “A few of the lads think it was a bit lucky, but I knew what I was doing.

The final whistled sparked celebrations both on and off the pitch at the Cardiff City Stadium and with the two-legged play-off to come next month, there could yet be better to come.

Arter said: “These moments you really want to try to take it in. In football you have a lot more lows than you do highs and when you have a moment like that you want to sit back and really take it in.

“When I reflected on it, the only similar feeling was when I got promoted with Bournemouth to the Premier League. That was the best experience I’ve had in football.

“This definitely is up there with it.”

Meanwhile, Daryl Murphy is relishing his emergence from Robbie Keane’s shadow as his career moves into its twilight.

The 34-year-old Nottingham Forest striker has had to remain patient over the years with Keane extending his remarkable record to 68 senior goals in 146 appearances for his country before finally hanging up his boots on the international stage before the World Cup qualifying campaign got under way last year.

Plugging the gap he left behind has proved a major task, and Murphy was handed his latest chance to do it in Cardiff three days after marking his 30th cap with his second and third goals against Moldova.

His tireless contribution to a famous 1-0 victory which secured a play-off berth epitomised Ireland’s industry and endeavour and left him hungry for more.

Murphy said: “It’s even better because over the years when I’ve been in the squad, we’ve had Robbie Keane, our main goalscorer, our best goalscorer of all-time in the team, so you know you’re not really going to get a chance.

“When you do get on, if you do get a bit of time on the pitch, you have to make the most if it.

“Recently, I’ve had a few opportunities and if the manager has the faith to start me in big games like he has done in the past, then I have to produce for him and thankfully I have.”

With Shane Long having joined Jonathan Walters on the injury list ahead of kick-off, Murphy operated as a lone striker as the Republic gradually wore down the Euro 2016 semi-finalists before nudging their way in front through James McClean’s priceless 57th-minute strike.

They then had to defend for dear life to preserve their slim advantage, but did so to spark wild celebrations on the final whistle.

Martin O’Neill’s squad met up in Dublin last weekend knowing only two wins would be enough to keep their Russian dream alive, and just as they had done against world champions Germany during the Euro 2016 qualifying campaign and when facing Italy in Lille at the finals, they delivered when they had to.

Murphy said: “Listen, I said this the other night after we won, I said we come alive on the big occasions, we always have.

“You look at the past results we have had — Lille, we needed to win, we did. We know when we are up against it, I don’t know what it is about us, it’s just our character and the want to win.

Murphy’s own hunger was illustrated graphically by the physical effort he put into the victory.

O’Neill had joked after the Moldova game that his thirty-something frontman is usually “calling for a stretcher” after an hour, but played him for 78 minutes in Dublin and into stoppage-time in Cardiff in his country’s hour of need.

When it was put to him that he might not have been expected to last so long, Murphy replied: “I didn’t either!

“The longer the game went on, I actually felt really good. It’s just fitness, isn’t it? You look after yourself.”