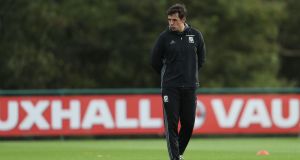 There was a certain amount of shock in Wales on Tuesday morning as news of Gareth Bale’s injury broke. The warning signs may have been there, it seems, in Chris Coleman’s speech at the FAW’s annual awards the night before but could also have been missed as the assembled crowd tried to take in how the Real Madrid star’s hopes of a fifth straight Player of the Year award had been thwarted by Reading defender Chris Gunter.

“This campaign we haven’t always had Balo, Rambo (Aaron Ramsey) or Joe Allen, ” said the manager who, as far as most people were aware at that point, was actually on course to have all three for this Friday’s game in Georgia and next week’s visit of Ireland. “They are obviously three super-special players but we haven’t always had them.”

Wales, as you might expect from their recent success, boast a pretty high win rate when the three are on top form but the numbers dip a bit when even Bale is indisposed. Figures for Gunter’s impact on the percentages are not to hand at the time of writing, possibly because nobody has seen any particular reason for totting them up.

Joking aside, the 28 year-old has done well for his country playing his part in their remarkable run at Euro 2016, but if every Welshman were fit and Roy Keane was outlining the scale of the difficulties that Chris Coleman’s side might be expected to cause Ireland, then it seems unlikely that the Reading right back would get much of a mention.

But Keane insisted that the absence of Bale would not do an awful lot to make Ireland’s target of a win in Cardiff next Monday any easier to achieve.

Ireland’s assistant manager initially insisted that he simply wanted to focus on the next game – “if you want to discuss the Wales game, you’re talking to the wrong guy” – but then suggested, when pressed on the matter, that the challenge next week will be just as great.

“I don’t think that it makes our job any easier to win our two games,” he said. “I still think that it’s tough for us to win. Wales have some decent players (and) I always think that if you (are saying that you) want players to be missing in public then you are being very disrespectful to other players.”

In any case, he said that Seámus Coleman is “as big a loss (to Ireland) as Bale is to Wales,” and that is before you get onto the matter of Jonathan Walters.

“I’m surprised that he is gone,” he said on Bale. “We knew that he had missed the weekend but I don’t sit at home praying that people get injured and miss games. We were asked about him the last day before we played Wales (in Dublin). It’s good for our players to play against the best players but it’s part of the game that you will be missing players and (the question is) how you deal with it.”

As it is, Ramsey and Allen are both likely to prove a handful for Ireland next week but Bale’s ability to drop deep, pick up possession then drive forward will be missed by a side that needs to win every bit as much as Ireland do. Then there are his goals.

“Listen, I wouldn’t mind having this conversation after Friday’s game,” said the Irishman.