McCarthy hopes to unleash Brady on Danes in decisive qualifier 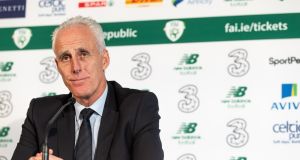 Pretty much all of the familiar faces are there in Mick McCarthy’s latest Republic of Ireland squad of almost 40 but having seized the limited opportunity he has been afforded recently to suggest a return to form, it is Robbie Brady who the manager seems to be eyeing up as having the potential to make a positive impact in the key final qualifier against Denmark on November 18th.

The 27-year-old featured in all four of Ireland’s Euro 2020 qualifying group games before the summer, starting the home win over Georgia and the draw in Copenhagen, but suffered a setback in preseason when he fractured a rib and first-team opportunities have been extremely limited for the Dubliner at club level since.

“I spoke to Robbie when we were in for the last two games and he was a bit concerned that he was out of the squad but he’d not been playing,” said McCarthy on Tuesday at the offices of SSE Airtricity, where he named an extended squad that also includes James McCarthy, Ciaran Clark and Shane Long but not the suspended Séamus Coleman.

“I’d love to have his ability on the pitch and his experience because he’s played a good number of times. He’s a left-footer but he can use both feet. He’s got great delivery and good set pieces. So, yeah, I’d love to have him fit. Let’s hope he gets some games.”

McCarthy says he is encouraged by the fact that the Dubliner has featured for Burnley twice in the past 10 days but admits he needs to push on from what was a strong showing after coming on late against Chelsea.

How many more minutes he gets over the next 10 days, during which Burnley will face Sheffield United and West Ham, remains to be seen and the possibility that he will need a decent run out in advance of the Denmark game is one reason, McCarthy insists, to be grateful for the New Zealand one four days earlier.

The goalkeeping situation is a particular concern. Randolph, McCarthy says, is confident he will recover from a thigh problem in time to play his part in the do-or-die game against the Danes but if he does not, the pecking order among his potential replacements is not entirely clear.

Four other goalkeepers have been named with Keiren Westwood comfortably the most experienced although he has had fitness concerns of his own in recent weeks and McCarthy suggests once again that game time might be the decisive factor.

That, the manager suggests, would put Kieran O’Hara, playing regularly at Burton Albion where he is on loan from Manchester United, at the head of the queue. “He is having a great season,” he says, “so based on my decisions on lots of others then somebody who is playing on a regular basis in a team has to be first choice”.

Caoimhin Kelleher, he acknowledges, is another contender and one who may get a second opportunity of the season to feature for Liverpool in Wednesday night’s League Cup game against Arsenal.

“Kells [goalkeeping coach Alan Kelly] likes him but, equally, he is not playing every week. And [when he does] he is playing behind that Liverpool team as well so I don’t know how much work he’ll have to do. He might get a bit more playing for us!”

Ensuring he is available, though, is one of the reasons the Ireland manager persists with naming extended preliminary squads, he says. The approach has come in for some criticism with the likes of Ryan Manning and Troy Parrott named here and singled out for some praise, still likely to end up missing out on the 23 long list for Denmark.

McCarthy admits he has seen the downside of it himself while still in charge at Ipswich as the club’s players were included then cut from Ireland squads but suggests that the need to serve notice on a club that somebody might be required inevitably leads these days to a sort of semi-official squad inclusion if only on social media.

His preference, he made abundantly clear, would be to leave it at that but, he seemed to suggest, he feels obliged, to do something at this stage of the process.

“This is a pain in the backside to me, to name them all and then cut them down. I’d sooner come in when I have to name it and just name the 23. But we have to tell the clubs and then the clubs tell everybody else. Don’t ask me. I’m kinda being led on this one.”