Solskjaer confident Fred can continue to deputise for Pogba 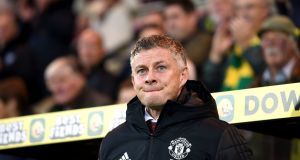 Ole Gunnar Solskjaer is confident Fred can continue to deputise for Paul Pogba, with the French midfielder expected to be out until December due to an ankle injury.

The World Cup winner has not played for his club since September 30th and, speaking after United’s 3-1 win at Norwich on Sunday, Solskjaer revealed it would likely be a minimum of about five weeks before the 26-year-old was back.

Solskjaer has backed Fred, who has started all three of United’s Premier League fixtures in Pogba’s absence, to enjoy a run in the first team, while Andreas Pereira is also an option.

Speaking ahead of his side’s League Cup clash with Chelsea on Wednesday, the Norwegian said: “Fred will probably take Paul’s position for a while now.

“That’s been brilliant for us, but Andreas has grown in the last few games. His energy and chasing and running . . . he’s a different sort of player but he can play also in the central positions.

“There’s no use talking about who’s not going to be here for a long, long time because he’s not going to come on the pitch and help us until he’s fit.

“Paul’s been brilliant and he is a creative midfielder that we need, but then it is up to the others to step up.”

United ran out 4-0 winners against Frank Lampard’s Chelsea on the opening day of the season, with Rashford on target twice while Anthony Martial and Daniel James were also on the scoresheet.

But Solskjaer does not expect his side to do the same on Wednesday.

“I think Frank has done a good job because the performance against us was good. The result was bad,” said Solskjaer.

“We held our hands up as well and said: ‘4-0? Yeah, flattering’. We were pegged back, they pressed us, but we scored two goals, the second and the third within a minute which decided the game for us, so we didn’t think we were 4-0 better than them but it’s going to be an interesting game.”

Chelsea have fared better in recent cup meetings between the two sides, however, winning two of the three played over the past three seasons, including the 2017-18 FA Cup final.

Solskjaer has used a number of young players this season, particularly in the Carabao Cup and Europa League, with 19-year-old defender Brandon Williams making his debut against Rochdale in the previous round, while fellow teenager Mason Greenwood found the net against the League One club.

Solskjaer hinted in his press conference that James Garner and Williams could be named in the squad for Wednesday’s clash.