With just Canada to beat, Tice is on the cusp of making her and Wilson’s dream come true 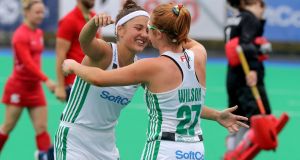 For your average teenager, five years might seem close enough to a lifetime, but back in the summer of 2015 Lena Tice and Zoe Wilson already had their thoughts fixed on 2020. The pair had yet to make their senior international hockey debuts, but having watched the agony of Ireland losing to China that June in a penalty shootout, thereby missing out on qualification for the Rio Olympics, the best pals made a pledge.

“We were playing for the Irish under-18s in Italy the month after and the team did really well,” says Tice, “we won the tournament and promotion to the top division of the Europeans. But I vividly remember having watched that shootout and feeling heartbroken for the girls, who were my heroes. So Zoe and myself said to each other that we wanted to go to Tokyo with Ireland, we wanted to be part of that effort, that was our goal.”

Fast forward to September 2019 at Belfield when Ireland were taking on, of all people, China as part of their build-up to their November 2nd and 3rd matches against Canada in Dublin, qualification for Tokyo the prize for whoever prevails on aggregate in the double-header.

And which two players won their 100th caps in that game?

“It’s a bit surreal,” laughs Tice, “Zoe is my best mate, we’ve come up through the ranks together and been through all the same highs and lows, so for us to play our 100th games together was amazing.”

And it’s been some trip for the pair since, not least the experience they had at the 2018 World Cup in London when both were key figures in the team that made it all the way to the final.

Tice, who was born in England and had spells living in the United States and Austria before moving to Glenealy, Co Wicklow, her mother Scarlett’s homeplace, when she was eight, was just 17 when she made her debut against Scotland in Glasgow, in November 2015.

The fact that she’s racked up a century of caps since then is an indication of just how intensive the squad’s schedule has been in that time – and how she cemented her place at the heart of Ireland’s defence from the off.

But despite her youth, she already had a wealth of international sporting experience having made her cricket debut for Ireland when she was only 13, making her, at that point, the second youngest player in the history of cricket, male or female, to play in a one-day international (after Pakistan’s 12-year-old Sajjida Shah).

Between cricket and hockey, then, she has over 160 international caps – and she won’t be 22 until next month. “It feels like I’ve been around for an awfully long time,” she laughs. “It takes a lot out of you, you have to give up a lot, but I love it – and I wouldn’t do it if I didn’t. But it can be an emotional rollercoaster.

“When I met up with my family after we won the World Cup semi-final I just broke in to tears. There are so many hard times in international sport, especially when you’re a smaller nation like us, you get knocked down so many times.

“And as an individual you face your own tough times when it’s not going well for you. I think that’s why I got so emotional, I just looked at my parents and thought of that journey over the years, it just hit me, you realised this was one of the moments you’ll treasure forever. They don’t come around too often.”

What was emotionally challenging too, she says, was “coming down” from the high of 2018, which was a remarkable year for her. She won the Hockey League and Irish Senior Cup double with UCD, where she is studying economics, before embarking on her World Cup adventure.

And before the end of the year she experienced more success with New Zealand’s North Harbour Hawks, helping them win their first league title in eight years, and Australia’s Canberra Strikers, winning bronze in their league finals and being named player of the tournament. And to top 2018 off, she was nominated for the International Hockey Federation’s “Rising Star”, the award for the best under-23 player in the international game.

“It was all you could ever have asked for, but it was hard too looking back on things come the end of the year – because they were gone. The high of the World Cup, you can’t just re-live that. All you can think about is the next thing. When I got home from Australia, I found it really hard to get back in to the swing of things and normal life, to start looking forward. That’s the honest answer, it wasn’t really brilliant looking back on it, it was a difficult time. Coming down from it all was a challenge in itself, having to start again after experiences like that was too.”

When life throws her challenges, though, Tice reaches for her faith which, she says, is the centre of her world and helps her put things in perspective, including her all-consuming desire to make it to the Olympics. “It’s not easy when you want something so badly. I haven’t even contemplated it not happening.

“But I know I can trust that the Lord already knows whether we’ll qualify for the Olympics or not. I’ll work as hard as I can to get there, but if I don’t, that’s okay. I’ll be no less in God’s eyes. There are times I feel the pressure, when it all gets too much for me, so I have to reset myself and say, ‘No, my faith is the most important thing to me, the absolute number one – the Olympics is not number one, God is’.”

Tice talks too about how her faith is a calming influence during stressful times, not least when she’s out there on the pitch during high-pressure games. “There’s a verse in the Bible that says, ‘The peace of God which surpasses all understanding . . .’ – that definitely is something that I have experienced, it’s just a calming effect that you can’t explain. You know, regardless of the outcome, that actually, it’s going to be okay.”

While some can be reluctant to talk so openly about their faith, Tice is comfortable doing so. “There are so many times when I don’t get it right, I fall short, but ultimately I’m absolutely convinced of my faith, that it’s the truth, it’s unwavering. My team-mates are all my closest friends, they all know about it, we have a very accepting environment, which is awesome. It’s the biggest part of my life, so I have to be able to talk about it.”

While she has the perspective side of it sorted out, that doesn’t, though, diminish her desire to make it to Tokyo. “The Olympics is the pinnacle, the World Cup was just a step along the way on that journey. And we didn’t allow ourselves get caught up in all that stuff, we clung to each other in that time, we refocused together for what is our ultimate goal.

“It’s funny now thinking back to myself and Zoe pledging we’d get there together, when we were so young. And here we are, just two games away from it happening.”

Lena Tice is an ambassador for the Team Hope Shoebox Appeal which sends gift-filled shoeboxes to children in Africa and Eastern Europe every Christmas. More information can be found at teamhope.ie.