Sid Lowe: Are we witnessing the end of the Messi era at Barcelona? 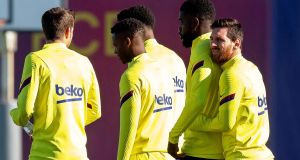 Quique Setién scoffed and then started laughing. “No way,” he said. He had been talking for 12 minutes and he was only halfway through, still trying to put out the fire, when he was asked if he regretted becoming the Barcelona manager.

“It’s true that a month ago I was at home and I had no problems,” he continued, “but [these are] blessed problems. I have the same enthusiasm as ever, the same will, because my life hasn’t been easy. You know things will happen here, you know the repercussions will be huge, but I’m blown by the north wind; I don’t go down easily.”

Nobody said it was easy, but nobody said it would be this hard. As for the problems, there are a lot. “It’s not normal to take over at a team that’s top,” Setién said when he arrived on January 13th but nor is it normal for so many things to happen so fast. And the scale of the latest problem – his captain and best player publicly calling out the sporting director – is yet to be fully gauged. The club’s president, Josep Maria Bartomeu, spoke to Eric Abidal and Lionel Messi on Wednesday, desperate to restore calm.

The day before Setién turned up, it was confirmed Luis Suárez needed an operation and would be out for three or four months. They sold two strikers, Carles Pérez and Abel Ruiz, to raise funds and make space for another, but having briefed that it was all tied up, they failed to sign one.

Carles Aleñá had gone too, and Jean-Clair Todibo, and Moussa Wagué, but still they had not raised enough. No matter, Setién said, Ousmane Dembélé would be the “signing”: he was on his way back to full fitness and would be “flying”. Then the news broke that Dembélé had torn a tendon in his thigh and would miss the rest of the season.

The squad are weaker, not stronger, than when Setién arrived; this is not what he was sold. On Wednesday morning only 16 first-team players were named to travel to face Athletic in Bilbao – and that is everyone they have got. Samuel Umtiti would have to make his own way there: he was wanted in court in the morning, accused of doing almost €200,000 worth of damage to a flat he was renting. At the weekend, Ivan Rakitic admitted he was unhappy at how Barcelona had tried to force him out. Arturo Vidal’s agents had already begun legal proceedings over a disputed bonus.

Abidal had suggested some of Barcelona’s players had been “unsatisfied” with the former manager Ernesto Valverde – responsible for his sacking, in other words. He also said they did not “work much”. For Messi, long assumed to wield power, the heaviest of dressingroom heavyweights and invariably burdened with responsibility, the accusation was intolerable. It took less than 90 minutes from the first brief advance of the interview going live for Messi to react: it was public and unequivocal, the division and resentment exposed.

On Messi’s Instagram account a red circle was drawn around the quote: “Lots of players were not satisfied and nor did they work much.” Below it, Messi demanded Abidal take responsibility for his actions, accusing him of “dirtying” the players and challenging the sporting director to name names.

Messi takes more responsibility than he should; he was not going to take this one too. Many thought he was right and even those who thought Abidal might be did not consider it a good idea to say so. The damage was done and it awoke the greatest fear: Messi leaving.

Messi has a clause in his contract that allows him to leave at the end of the season – and for free. As Abidal admitted, all he has to do is communicate that in May. The 32-year-old has said repeatedly he wants to finish his career at Barcelona but has also said he wants to compete and over the past five years he has felt increasingly like Barça do not. Nor does he have long left: at December’s Ballon d’Or presentation for the first time he raised the question of retirement. There is a growing feeling his final years are being wasted and Messi is not immune to that feeling.

Messi has not won the European Cup for five years. He has watched Barcelona fail to build around him – whether he is part of that problem is a broader, more complex question – and seen a generation slip into retirement and not be replaced. He has seen a lack of direction and certainty, four directors of sport and endless advisers under this regime. He has seen the president become vice-president as well and the team become weaker, despite spending €1 billion since the departure of Neymar. And now this. No wonder he snapped.

Messi’s response does not come in isolation: there have been small signs of distrust everywhere, glimpses of the divisions opening up, and not just from him. This is the player who stalled on posing for a photo with the president after his last contract renewal, as if reluctant to legitimise him; the player who said the director Javier Faus, who had suggested there was no reason why Messi should get a new contract every year, “doesn’t know anything about football”; who saw his friend Dani Alves suggest that, by leaving, he had delivered a deserved and “classy blow” to the board.

Since Neymar left there has been a sense of the club reaching for something that has gone, desperate for a solution that never arrives. The only solution, it often felt, was Messi. He was a shield behind which many hid, a reason for complacency, conditioning everything. He wanted to share that burden, have a team constructed around him. Instead, he must have wondered what else he had to do, why it always seemed to come down to him. In the last few weeks, even his best friend Suárez has been absent, with Messi cutting an even lonelier figure.

This summer Messi watched his other great friend Neymar and Barcelona end up in court, even while they spent the summer supposedly courting each other. And then said: “I don’t know if the club did everything they could to sign him.” Messi wanted Neymar but he didn’t get that wish, however much they say he runs the place. The irony of course is that if the response is to sack Abidal, which it might be if only because the alternative is so awful, another short-term fix, it would reinforce the idea Messi is all powerful. Another fire to put out, sparked by Abidal’s hint that player power was too great.

There is no player like Messi; his reaction, at least, illustrates he felt the finger pointing at him and was not prepared to let it go. He asked for names: maybe some were not happy, maybe some were not working but do not look at me. And do not hide behind me either. He has enough responsibility already to take on other people’s errors as his own, to be made a participant of the problems piling up since Setién arrived and well beyond that, failure delivered to his doorstep again. Above all, to be blamed for this mess.

The AS journalist Santi Giménez on Wednesday offered a simple response to the accusation Messi runs Barcelona: if only. – Guardian

1 Cian Healy: ‘Realistically I got away with murder when I was younger’
2 Johnny Sexton: ‘We just know we have to be a lot better in all areas on Saturday’
3 Seán O’Brien: Anger over my parents’ break-up never left me
4 Ireland's centre will hold thanks to Henshaw and Aki’s midfield muscle memory
5 Sub-four miler Michael Woods kicks to another Vuelta stage win
Real news has value SUBSCRIBE
Crossword Get access to over 6,000 interactive crosswords