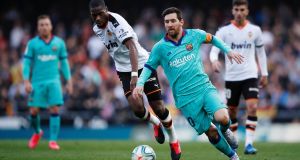 Sports Extra customers will be able to watch every La Liga match for no extra cost from Wednesday, January 29th after a change in the pricing structure of the new LaLiga TV channel was announced on Monday.

The new channel was initially due to be offered as a Premier Sports standalone subscription, separate from Sports Extra, for the cost of €5.99 per month. However, it was announced on Monday that it will now be included in the Sports Extra package which is available exclusively to Sky Ireland customers.

The Sports Extra pack also includes BT Sport 1, 2 and 3, ESPN and Premier Sports 1 and 2. For customers who already have Sky Sports the package costs €10 a month extra while those who are Sky TV customers but do not subscribe to Sky Sports will pay €17 a month for the first six months and €34 a month after that.

Sports Extra only be available to customers who are signed up to Sky as their TV provider. It is not necessary to have Sky Sports, but a Sky box is needed to access the package.

Customers who are subscribed to Sky Sports and Sports Extra already receive every televised Premier League match, Champions League, Europa League, FA Cup and the Carabao Cup with every La Liga match now being added to that.

LaLiga TV is a 24-hour channel which broadcasts every match live each weekend at 10 separate kick-off times with the Saturday afternoon match broadcasting exclusively in Ireland as it cannot be shown in the UK due to blackout laws.

The channel has been free to all Sky customers for the last two weeks but will become exclusively part of the Sports Extra package from Wednesday.

Premier - which is owned by Dublin businessman and Setanta Sports co-founder Mickey O’Rourke - has been showing LaLiga matches on their main channels since September after the league’s deal with Eleven Sports came to an end following the conclusion of the 2018/19 season.

LaLiga has operated individual kick-off times for a number of years meaning that no two matches clash - they are spread across the weekend from Friday night to Sunday night. In the UK the Saturday afternoon kick-off will not be available to watch live due to broadcasting laws. That will not be the case in Ireland as those laws do not apply here - this enables Premier to show a live Premier League match at 3pm each Saturday.

1 TV View: Roy Keane but Daragh’s keener as Late Late fails to shoot the lights out
2 Ireland Slam England at the Gardens to open up Grand ambitions
3 ‘Manchester United are lucky to have you’: Klopp responds to Donegal schoolboy’s letter
4 Six Nations: Ireland v England all you need to know guide
5 Solskjær backs Martial to get 20 goals for Manchester United for first time
Real news has value SUBSCRIBE
Crossword Get access to over 6,000 interactive crosswords