DCU qualify for their first ever Collingwood Cup decider 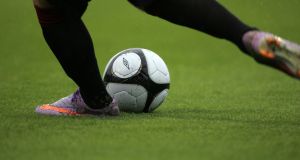 DCU will now take on University of Ulster in Wednesday’s final at Dalymount Park. Photograph: Inpho

Dublin City University qualified for their first ever Collingwood Cup decider on Tuesday as both of last year’s finalists went out of the competition at Trinity College in Dublin.

After eliminating UCD on penalties on Monday afternoon, a DCU side coached by Declan Roche and Johnny McDonnell put five past a University of Limerick side that contained several players with League of Ireland experience.

Galway United underage player Oleg Vysochen gave Limerick the lead after half an hour but the Dubliners had their noses in front by the break thanks to two goals from Jack O’Connor - the first a free from just outside the area and the second a close range finish after a well worked short corner.

As Limerick chased an equaliser in the second half, they were almost gifted one by DCU defender Eric Whelan. But his misdirected clearance was well saved by goalkeeper Imrich Toth, and in the closing stages Roche’s side pushed on to wrap up the win with two goals from Sean Cronin and one from David Mugalu.

DCU will now take on University of Ulster in Wednesday’s final at Dalymount Park (kick-off 5pm) with the northerners beating defending champions University College Cork 2-1 in the other semi-final.

Nathan Best gave UU the lead less than two minutes in before Matt McKevitt levelled things up again on the quarter hour. Niall McGinley then grabbed a second half winner for his side from a corner and though UCC pressed hard for the goal they needed late on - in what was an exciting contest - they couldn’t quite save themselves in the end.

It will be UU’s first final since they last won the competition back in 2008.