Is he prepared to work on set-piece weaknesses or would it betray his principles? 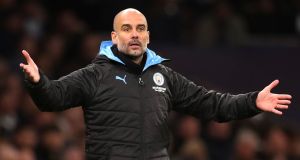 In their recent contribution to the “Pep Guardiola – WOW!” genre of sports books, “Pep’s City: The Making of a Superteam,” journalists Lu Martin and Pol Ballus reveal that one day Guardiola took a black marker pen and wrote out on a white office wall a long quote from his coaching idol, Marcelo Bielsa:

“The moments in my life when I have improved are closely related to failure; the moments in my life when I have regressed are closely related to success. Being successful deforms us as human beings, it relaxes us, it plays tricks on us, it makes us worse individuals, it feeds our egos. Failure is the complete opposite, it forms us, makes us more solid, brings us closer to our convictions, makes us more coherent . . . Never allow failure to affect your self-esteem. When you win, understand that praise and accolades are deceptive for they feed our ego and deform us. When you lose, the opposite happens.”

It’s standard inspirational sports talk, really – never give up, and never rest on your laurels either. Beware praise above all. You could almost forget that last May, when City won their second successive league title, Guardiola complained that his team had not been praised enough for their achievements, pointing out that one newspaper gave more prominence to a story about Paul Pogba having a row with Manchester United fans at Old Trafford than the one about City winning the league. That’s the thing about praise, even Pep is thinking: I’m addicted to you, don’t you know that you’re toxic?

There was a strange atmosphere around yesterday evening’s match between Tottenham and City. It felt strange to see Guardiola and Mourinho face each other with so little at stake. When their rivalry was at its peak their matches were the best football you could see anywhere in the world, characterised by astonishing intensity and unbearable tension, and often settled by moments of sheer genius: that flying header by Cristiano Ronaldo in the Spanish Cup final, that slalom dribble by Lionel Messi in the Champions League semi-final.

Yesterday they served up glorious slapstick, featuring a protracted Var farce, a missed City penalty, performative touchline outrage from Mourinho, a red card in which Oleksandr Zinchenko finally picked up the tab for three seasons of City tactical fouling, and Tottenham scoring with their first two shots on target after a vastly superior City had missed a dozen or so chances.

One is almost reluctant to mention the xG statistics that show how City should have won by at least three goals, lest it be interpreted as an effort to praise Guardiola’s men when they are down. Their current situation, though deeply disappointing, is at least the sort of environment that in Bielsa’s theory should provoke a new phase of learning and growth.

This was the second successive match City had lost while failing to score and dominating the xG, after their 1-0 defeat to Manchester United in the Carabao Cup semi-final in midweek. The most memorable moment of the United match was when David Silva, with the ball rolling towards him invitingly and the goal at his mercy eight yards away, decided to pass sideways to Ilkay Gundogan, who seemed as surprised as anyone else in the stadium to see the ball coming his way, and fumbled the chance.

Guardiola is unforgiving of players who miss easy chances. In the Amazon documentary about City’s 100-point season, there’s a scene when he speaks to then-assistant Mikel Arteta about Raheem Sterling.

Sterling had recently missed a sitter at Burnley and been substituted shortly thereafter. Guardiola tells Arteta that he’s spoken to Sterling, who is “devastated.” Guardiola: “And I said to him, ‘Just so you know, I changed you because of the mistake. You can’t miss a chance like that. I expect you not to make mistakes. You can’t miss that one’. And he said, ‘You’re right. I can’t make that mistake. I can’t’.”

A few weeks after the Burnley incident, Sterling missed another sitter in a match against West Brom. This time, perhaps to prove there were no hard feelings, Guardiola grabbed the passing Sterling and kissed him while the anxious-looking player tried to wriggle free from his coach’s grasp. Guardiola lives at the extremes; either he’s icily explaining to you why you deserved to be hooked for a mistake you plainly didn’t mean to make, or he’s kissing your face like a madman in an apparent gesture of reassurance when all you want to do is get on with the game. His players just have to learn to live with the back-and-forth.

City messed up a lot of easy chances against Spurs, which was probably why Guardiola kept them in the dressingroom for a 45-minute debrief after the match. When he finally emerged for a delayed post-match press conference, he denied that he was angry. “I believe you are closer to winning games when you create more chances. It happened today but sometimes it is not enough. We have to accept it. ” Guardiola said.

But City cannot simply accept being 22 points behind Liverpool – according to Opta the biggest lead ever in the English top division. They can’t do anything about Liverpool losing every match, but they can do something about all the points they’re leaving out there themselves.

Is Guardiola prepared to work on this weakness in a systematic way, or would he see such prosaic method-football as a sort of betrayal of his principles?

“It’s a team built to play a certain way,” he said last night, “We have to be so precise, we have to see good...” You can’t deny the attacking quality of his teams – even this season’s edition is outscoring everyone else in the league. Yet the weaknesses have been thrown into sharper relief by that 22-point gap. When you find yourself this far behind, isn’t it time to adapt?

That’s what Jurgen Klopp has done.

One impressive thing about his team is how multifaceted they have become: they can still run and press as in his early days, but now they have mastered many other styles and weapons, they can play patient possession or quick counter-attack, in any one game you will see them go slow, fast, short, long, high, low: they can do whatever it takes. This is why, even on the frequent days when they’re not “so precise”, they end up winning the game. If City intend to put up more of a fight next season, it’s time to embrace that diversity.