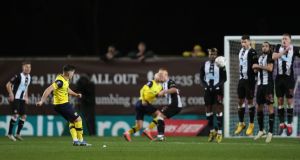 A superb solo effort from Allan Saint-Maximin saw Newcastle edge past Oxford in extra-time of their FA Cup replay and reach the fifth round for the first time in 16 years.

Oxford took the tie the distance with two goals in a frenetic final six minutes of normal time but Saint-Maximin’s strike was enough to settle the contest 3-2 in favour of Steve Bruce’s side.

Recent cup runs have been lacking for Newcastle but they would have thought they were on a smooth course to round five as Sean Longstaff and Joelinton had them two goals up at half-time of a replay which stemmed from a forgettable 0-0 draw at St James’ Park.

But their League One opponents rallied late on, Irish midfielder Liam Kelly’s free-kick getting them back into the tie before Nathan Holland’s fine strike deep into added time took the game into extra-time.

Rooney netted a second-half penalty as the Championship Rams saw off their League Two visitors in a fourth-round replay at Pride Park.

Goals from Andre Wisdom and Duane Holmes put Derby 2-0 ahead at the break before Nicky Adams pulled one back.

Jack Marriott and Rooney made the game safe for Derby but the Cobblers grabbed another consolation with a Sam Hoskins spot-kick.

Reading claimed a dramatic penalty shoot-out victory over Cardiff to book a fifth-round home tie with Premier League Sheffield United. In a game that finished 3-3 after extra time, Josh Murphy and Robert Glatzel struck either side of the interval for Cardiff before Omar Richards and substitute Andy Rinomhota forced another 30 minutes.

Murphy pounced on a Gabriel Osho mistake to poke home his second and restore Cardiff’s lead, but Yakou Meite forced penalties four minutes from time. Reading won the resulting shoot-out 4-1 as Garath McCleary, Osho, Jordan Obita and Sone Aluko gave the Royals a 100 per cent return from the spot and Cardiff’s nerve buckled as Aden Flint and Will Vaulks missed. This was the third meeting between the two clubs in 10 days, games more notable for incidents off the field than the action on it.

Goalkeeper Lee Camp was Birmingham’s hero as the Championship side clinched a place in the fifth round, also on penalties, against Coventry.

Camp saved penalties from substitutes Liam Walsh and Jamie Allen as Birmingham won 4-1 in a shootout after twice coming from behind in a 2-2 draw after extra-time.

1 America at Large: On Long Island, longing for a return to our field of dreams
2 ‘For 25 minutes I ran out of oxygen’: Pepe Reina on his coronavirus battle
3 Kevin Mitchell: Hard to figure out why it took so long to cancel Wimbledon
4 Woods and Mickelson to play coronavirus relief match – reports
5 My favourite sporting moment: Game, set and couch as Borg takes down McEnroe
Real news has value SUBSCRIBE