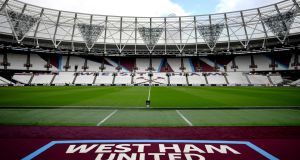 West Ham have confirmed plans to install two new tiers of seats closer to their London Stadium pitch in time for the 2020-21 season.

Hammers fans have been critical of the seating arrangement at their home ground, claiming it detracts from the atmosphere on matchdays.

A statement on West Ham’s official website said: “Following consultation with the Official Supporters Board (OSB) to help inform the brief and an extensive process between the club and (stadium owners) E20, Arena Events Group has been appointed to develop the new seating system.

“Arena will deliver two new lower tier stands bringing fans closer to the pitch, many by more than four metres, with the stand being squared-off in line with a more traditional football stadium configuration behind the goals.

“Following a period of design development, E20 and West Ham United will review the stands with the aim of installing the seats this summer.”

London Stadium was built for the 2012 Olympics and after being converted into a football ground at a reported cost of £323million, West Ham became tenants in August 2016.

Many Hammers fans were reluctant to leave their previous home at Upton Park and have been critical of the matchday experience at the London Stadium.

Supporters have claimed that as well as the distance between the seats and the pitch being too big, transport links to the stadium, plus both toilet and catering facilities in some areas are unsatisfactory.

West Ham drew 3-3 with Brighton on Saturday — having conceded twice during the closing stages — and are currently 18th, one point from safety.

The Irons sacked manager Manuel Pellegrini at the end of December, with David Moyes returning to the east London club for a second spell.

Former Real Madrid and Manchester City boss Pellegrini admitted he had been left “hurt” by his departure, having tried to move the Hammers forward.

Speaking to Chilean media outlet La Tercera, Pellegrini said: “It hurt me. It is the first time in 20 years that I did not end the season. In all clubs (that I had left), the campaign was over.”

Pellegrini felt he had tried to improve the direction of the club, having invested heavily in the playing squad since his arrival during May 2018.

“I returned to England to a challenge. To West Ham, who usually fights the descent (relegation), but which is very large. My intention was to make it grow,” he said.

“Unfortunately, we had a major injury, from the goalkeeper (Lukasz Fabianski) of four months — and the performance of the replacement (Roberto) was not as expected. He had responsibility in several goals.

“The team was losing confidence, the results were denied and the owners decided to change.”

Pellegrini added: “In football, the first thing that one must understand is that the manager always has the responsibility.

“You can fall into those negative streaks. The players lose confidence and you, as a coach, must find the solution. You don’t always find it and sometimes the club do not have patience in leadership.”