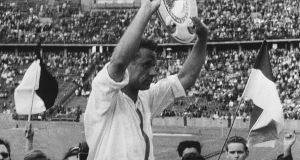 Eintracht Frankfurt’s Alfred Pfaff is carried in triumph after his side’s title-winning success in 1960. Photograph: Keystone-France/Gamma-Keystone via Getty Images

At the end of their four-week goodwill tour of the United States, three of the Eintracht Frankfurt squad had to be stretchered onto their plane for the journey home.

The walking wounded included fractured legs, a fractured skull, a cracked knee cap, a separated shoulder and several cases of internal bleeding caused by kicks to the stomach. Most of the carnage, the German party claimed, had come in the final game, a 3-1 defeat by Glasgow Celtic at Triborough Stadium on New York’s Randall’s Island, a torrid encounter that got the full-throated treatment in the local tabloids.

“I don’t know who was at fault, but it was a pitiful exhibition,” wrote Jimmy Powers, a columnist in the Daily News.

“The young Eintracht team was no match physically for the bigger and better seasoned Scottish pros. The parade of Germans being carried off the field became almost monotonous. My only thought is that more care should be taken by the American authorities in supervising future goodwill tours involving Europeans.”

When Eintracht Frankfurt opened swanky new offices on Sixth Avenue near Times Square last month, they name-checked the 1951 tour as evidence of the club’s long-standing, unique relationship with this country.

Perhaps out of politeness, nobody mentioned the extreme physical toll that historic trip took on the players, preferring to offer it up as evidence that the 11th -placed team in the Bundesliga is not just another European powerhouse hoping to turn a quick buck in this corner of the ever-expanding market for the beautiful game. America has already been too good to them for that.

Sixty-nine years ago, Eintracht came here hoping to make enough money to finance the reconstruction of the main grandstand at their Riederwald Stadium, which had been destroyed by Allied bombs during the second World War.

An eight-game tour was organised by the German American Soccer League of New York, but, before the players even left newly-created West Germany, a country just emerging from rationing, every unmarried man in the squad had to sign a pledge guaranteeing they would not “acquire an American wife” during the trip. A stipulation inserted by the US State Department, fearing the visitors might take the hasty marriage route to a green card.

Nearly 20,000 thronged Triborough Stadium for their opening 5-1 victory over a team of German-American All-Stars on May 6th. There followed five more facile victories in Buffalo, Toledo (where the pre-match entertainment was the Clan McGregor drums and bagpipes and the half time show was Bavarian folk dancers), Milwaukee, New Jersey and New York.

The only blip came when they got turned over in St Louis (the traditional beating heart of the American game) by Zenthoefers, a local outfit bolstered by several United States internationals who had defeated England at the World Cup in Belo Horizonte the previous year.

Everywhere they went, even on a courtesy visit to the United States Military Academy at West Point, Eintracht spread goodwill and enhanced their reputation.

Then came the showdown with a Celtic side featuring, among others, Bertie Peacock and Charlie Tully. One wire report described it as “the best game seen in New York in years”. The Brooklyn Daily Eagle led with the more pejorative headline, “Scotland Tops German Booters In Rough Clash”. Most accounts mention the German keeper Helmut Henig coming in for repeated rough treatment although none bothered to report Eintracht’s opener after 30 seconds came when Hans Wlocka kicked the ball out of the hands of Celtic’s custodian George Hunter.

That the referee, James Stevenson, was a Scot lent itself to Frankfurter conspiracies the fix was in. Well, that and the fact he awarded three penalties, only one of which Celtic scored.

Then again, this was the type of match where bias was in the eye of the beholder, both sides later blaming each other for the foul play. Bobby Collins, a-20-year-old midfielder that day, reckoned 19,500 of the 20,000 in attendance were Germans baying for blood, and they nearly got some at the final whistle.

“We were right back to the war days of 1939-45, and it was quite a battle while it lasted,” wrote Collins for the Evening Times.

“As we came off the field one of the Germans hit our manager Jimmy McGrory with a very nice right-hand punch to the chin, just about the same time as two massive frauleins stationed themselves on each side of the tunnel leading into the pavilion. We were bashed over the head with two whacking great umbrellas, which maybe shows that you are safer on the football field after all.”

Despite the ignominious end, the tour served its purpose. Eintracht returned home with $50,000 and the wherewithal to rebuild their stadium, replete with floodlights. By the end of the decade, they were champions of Germany and all those involved in their current New York enterprise are adamant that wouldn’t have been possible without the money made in America. There were other footnotes to the tale too.

Nine years after facing down Celtic, Alfred Pfaff, a plumber by trade, was still scheming in midfield when Eintracht put 12 past Glasgow Rangers over two legs in the 1960 European Cup semi-final. That punched their ticket to a final at Hampden Park where they were humbled 7-3 by the otherwordly Real Madrid of Di Stefano, Gento and Puskas before a crowd of 126,621. And not an umbrella-wielding fraulein among them.