Shamrock Rovers on course to rekindle love for an old flame 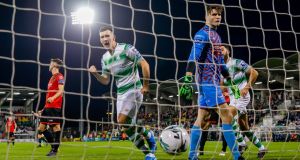 The club’s longstanding love affair with the cup must feel like something akin to ancient history for the current crop of players but a few of the fans might be getting that old familiar tingling feeling after seeing Shamrock Rovers coast into this year’s quarter-finals thanks to goals from Gary O’Neill, Aaron Greene, Aaron McEneff and Seán Kavanagh at Tallaght Stadium.

It was straightforward enough stuff with United looking very much like a good side from a lower division, well organised defensively and confident enough at times to unsettle the home side’s three-man defence but simply not good enough to match their opponents.

For all their efforts, they gave Stephen Bradley’s side both time and space in which to work, a dangerous game when you have the likes of Ronan Finn, Jack Byrne and Graham Burke poking and prodding at you from around the edge of the area.

Byrne may have been the first-half hero the other night in Waterford but it was Burke here who led the early effort to make a breakthrough. Recently returned home from a largely frustrating spell in England he looked to be enjoying himself through an opening period during which he hit the woodwork once, went close a couple more times and not so close a couple more.

Byrne posed the usual threat from set pieces and in the circumstances, United could do little about the number of corners being conceded. A handful led to close calls but there was nothing especially menacing about the one from the right in the 56 minute until it was cleared straight back out to the midfielder whose follow-up cross perfectly teed up substitute O’Neill to head home from in front of the near post.

Three minutes later, it was all but over when a Burke free was badly spilled by Luca Gratzer and Greene was first on the scene to take advantage. There were clear signs that the first division players were fading with just over a quarter of an hour remaining as McEneff turned one way then another deep inside the area before being allowed the time to pick his spot from less than 10 yards out.

It all felt a little hard on a Drogheda side that might have nicked an early lead when Ethan Boyle was dispossessed inside the area but the opportunity was gone again in an instant and Chris Lyons, whose goal put Rovers out when the two sides met a year ago, was quickly overwhelmed.

They showed plenty of character to keep at it until the end and even managed to force a couple of decent saves from Alan Mannus late on but Rovers were simply too good for them on the night and Kavanagh made it four from close range with three minutes remaining.

It proved little enough really but with one of the two sides to monopolise places in the final these past few seasons going out, they might be forgiven for starting to dream that this just might be the year they get to rekindle things with their old flame.