Sheffield slowly reawakening as a football city in recovery 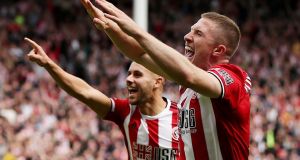 There was a time when reporters would get overexcited at a game, particularly a feisty derby, and we would whip out the old line that the match had a “whiff of cordite” about it. It was as if we, or any reader, had recently fired a musket.

Perhaps, therefore, in an attempt to be more appropriate, while walking up Shoreham Street before a Sunday lunchtime Sheffield derby in 2011, it seemed more accurate to record that the morning’s anticipation had the whiff of vinegar about it.

Eleven in the morning it may have been, but fish and chip shops around Bramall Lane were getting their suppers out early.

It has that kind of old-school association, Bramall Lane. United’s signature song is about greasy chip butties and pints of ale. It would be a stretch to say that even Irish Blades as far back as Billy Gillespie or Jimmy Dunne would recognise their old ground – it was bombed heavily in the second World War – but it is most definitely not one of those modern out-of-town pre-pack stadiums. It has heart and soul and plenty of old bricks.

Hillsborough is similar. It was once out of town – Owlerton was a suburb when Wednesday moved there in 1899. The Owls, as they would become, had been at Bramall Lane for a while before then, and had economics been different Wednesday may have stayed there and Sheffield might have had just one professional club. It would have been a force, you imagine.

Instead two clubs went their separate ways and produced their own red and blue histories. Some of it is glorious, some of it isn’t. But it is theirs and it is treasured, and what it means to locals could be felt that 2011 morning amid the salt and vinegar.

Here they were, both in League One, battling out a 2-2 draw. It was raucous and loud, but no cordite. People left knowing they had witnessed a contest, and while the rest of England may have shrugged at a third division game on a Sunday lunchtime, in Sheffield it was savoured and the debate went on. All politics is local, as they say.

A few months later it was Steel City derby part (II). Wednesday won 1-0 with a certain Harry Maguire on the losing team. He was 18.

A couple of years earlier, another 18 year-old, Kyle Walker, had also been blooded by the Blades. Here was the city’s reality: third division football and United fielding teenagers.

Wednesday got out of it back into the Championship soon enough, but United were still playing League One opposition in season 2016-17. Only then, in Chris Wilder’s first season in charge, did they return to the Championship.

Wilder comes from Stocksbridge in the city. It is where Jamie Vardy went to play non-league after his release from Wednesday at 16.

On Tuesday night these were details to consider afresh. Wednesday had just defeated Luton in front of over 23,000 at Hillsborough to move top of the Championship. This felt like a fairly unlikely development given it was only a few weeks ago that manager Steve Bruce departed and a “soft” transfer embargo was still in place. There they were though, the Owls, perched, under caretaker Lee Bullen.

It didn’t last – Leeds, Swansea and Fulham leapt over Wednesday 24 hours later. Still, three wins from four games, it’s been a positive start for the club.

Meanwhile, across the city and a division above, the embryonic Premier League table showed Sheffield United sitting eighth. They are undefeated after two games. Again, some will have considered that unlikely.

It could unravel from here, of course. But for a few hours at least it was possible to see Sheffield as a football city in recovery.

We should be wary of moving too fast, bogus optimism being all the rage. But as James Shield noted in Sheffield’s Star last week, the city is pretty resistant to such forces. Sheffield does not do self-celebration especially well, as Shield pointed out, and considering its football heritage it could be otherwise.

After all Sheffield FC – the amateur club formed in 1857 – are officially recognised as the oldest football club in the world. Bramall Lane, similarly, is the oldest professional football ground on the planet. It opened, for cricket, in 1855 and seven years later staged its first football match.

The city had its own Sheffield Rules and held a competition, the Youdan Cup, four years before the FA Cup. For good measure the first ever floodlit game was at Bramall Lane too – in 1878.

You need to dig this stuff out, however. This isn’t Manchester or Liverpool where [rightly] they’d be shouting about it.

It was the same when trekking to Burngreave cemetery to see the unmarked grave of Jack Reynolds, the first man to play for Ireland and England – 125 years before Declan Rice became the second. Unmarked.

Weeds and ivy have been allowed to spread maybe because of sustained mediocrity – Sheffield United have not been champions since the 19th century; Wednesday have not been in the Premier League for 16 years.

All is not rosy even today, Wednesday have sold Hillsborough to the chairman in a bid to avoid FFP restrictions.

So there has not been much to crow about. But there is this week. It may only be temporary, but if it is not, then Sheffield, the place, has the chance to ease the vinegar aside and reclaim its position as one England’s authentic football cities.

Chris Wilder has reasons to be buoyant but his tone on Thursday was mournful when the subject of Bolton Wanderers and Bury arose. Wilder was once on the staff at Bury.

At other clubs, those directly affected by Bury and Bolton’s inability to stage matches, there is further sympathy, but also a rising sense of injustice.

Doncaster Rovers, for example, were looking forward to facing Bolton on Tuesday night. Bolton had just lost 5-0 at Tranmere, and if you run a club then every three points count. Doncaster were already counting them.

Then they were informed, late and unofficially, that the game was off due to “player welfare” issues. The Football League proved itself powerless once again. Governance in English football is erratic.

There was some renewed hope that Bolton’s situation will be resolved, but even if it is, there will be an issue of sporting integrity to address.

If Bolton are purchased and build a squad stronger than their current one – not hard – then Doncaster will find a different problem when they play their rearranged fixture. It will not be the same problem Tranmere encountered and if three points or less separates those two clubs next May – or Wycombe or Coventry who have also played Bolton – then we will not have heard the last of players’ welfare.