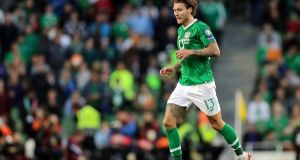 Mick McCarthy is hoping Jeff Hendrick gets some first-team action with Burnley ahead of Ireland’s European Championship qualifier against Switzerland. Photograph: Laszlo Geczo/Inpho

Republic of Ireland manager Mick McCarthy says he intends to wait until after the midweek matches in England before finalising his squad for the European Championship qualifier against Switzerland in Dublin on September 5th.

“Our main concern at the moment is still about players getting games,” said the 60-year-old, who will be at Fulham’s game with Nottingham Forest on Saturday. “But Darren Randolph and Keiren Westwood are playing well, the four Sheffield United players are all starting, as is Scott Hogan, while Robbie Brady is still recovering from his rib injury.

Among the players McCarthy is hoping might see some first-team action over the coming week is Jeff Hendrick, whose involvement in a training game this week was the closest he has come to action for Burnley so far this season.

“I have no doubts about Jeff’s ability or his fitness, he has covered so much ground for us in this European Championship already as the stats prove, but like all our players, he needs to play.

“He might feature against Wolves in the Premier League on Saturday and should be involved in the League Cup game at home to Sunderland next Wednesday night which we will have scouted.”

“I’ll probably see where we are after the League Cup games before making a final decision on the squad for Switzerland and after that, we can always add players from the provisional squad for the Bulgaria game.”