Emery looking for signs of improvement as Arsenal go to Anfield 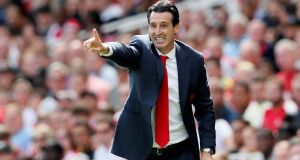 Anyone seeking to judge Arsenal on the basis of a performance at Anfield tends these days to come away with brow furrowed and head shaking sadly. The scene of their most famous hour has become a theatre of modern nightmares; one where they are eviscerated at will and where, of 22 goals conceded there in the past six years, 15 have come before the change of ends. If Saturday’s return is to be the start of something it would be a good idea for Unai Emery’s team to actually get started.

It is a fixture Arsenal fans have become accustomed to watching through their fingers. But it is the one their manager may scour for clues more closely than any other. Emery’s opacity can be frustrating, but he has never hidden the thought that Liverpool, and specifically their progression from meandering nearly-men to European champions, are an obvious benchmark for Arsenal to follow.

Last December he explained that he and his coaches had studied Liverpool’s rise from eighth place under Jürgen Klopp, a feat underlined within days when they overwhelmed a shambolic Arsenal in winning 5-1. If Arsenal can get significantly closer this time Emery will see the clearest indication yet that his changes are taking hold.

“Saturday is a massive match, an amazing opportunity for us to do something important,” Emery said. “Knowing it is going to be difficult, but really we can [say]: ‘We are here.’”

Those around Arsenal’s training ground sense an early-season vibrancy that had been missing in recent years; a real “statement” away victory has been lacking too, but Emery spoke with a relish that suggested they will carry the fight.

Perhaps he feels this is a good time to play Liverpool, who join Arsenal on six points but have defended with a skittishness more reminiscent of those early Klopp years. If, as he hinted on Thursday, Emery gives Nicolas Pépé his first start then he can field a front three of pure attackers who collectively scored three more than Liverpool’s equivalent (72 to 69) in all competitions last season.

Going blow for blow might yet be too risky but it is a thrilling thought, and Arsenal, whose midfield has also been given added life by Dani Ceballos, sense their chance.

At the same time he asked that little heed should be paid to the narrow wins over Newcastle and Burnley: both fixtures, he noted, brought the same outcomes last season. But the previous time Arsenal won their opening two league games was August 2009.

There are, as usual for Arsenal since the mid-2000s, warnings to take from what followed. After thrashing Everton and Portsmouth they faced back-to-back games against Manchester United and Manchester City, losing both. This year the visit to Anfield directly precedes a north London derby. Should Arsenal emerge undefeated from those assignments there will be clear grounds to suggest Emery is equipped to narrow the gap.

Emery remembers specifics of the December capitulation that he believes were unusual: the “not normal” concession of two penalties that were “maybe fair … maybe not” and the two quick goals conceded through defensive mistakes after Ainsley Maitland Niles had opened the scoring. Eliminating errors will be the baseline if Arsenal are to have any hope of showing a fresh complexion up front.

In what now seems a different universe, Emery’s Sevilla inflicted Klopp’s first major Liverpool setback with a 3-1 win in the 2016 Europa League final. Twelve of the 18 players in Klopp’s matchday squad have since left, and the idea Sadio Mané and Mohamed Salah would one day tear defences apart would have felt fanciful.

A serious run at honours took another two years and a series of personnel changes. Emery, whose contract has a break clause next summer, is up against the clock, but hopes Liverpool’s turnaround sets a precedent for expectations of his own work.

“They are adding titles [now] and I think we are going our way to create a big mentality,” he said. “We also need time.” Exactly how much longer Emery and Arsenal require may soon be much clearer.