Ken Early: VAR in danger of descending into pointless pedantry 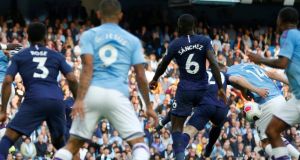 Manchester City’s Aymeric Laporte handles the ball in the build-up to the goal scored by Manchester City’s Gabriel Jesus that is later disallowed following a VAR review. Photograph: Carl Recine/Action Images via Reuters

Of all the predictions that were made about how VAR would affect football, the most inaccurate turns out to have been that it would “take the emotion out of the game”. Instead VAR has introduced new emotions, its dramatic reversals producing fresh strains of impotent frustration and gloating relief.

It’s not as though goals were never disallowed in the past. The new thing about VAR-disallowed goals is the time it takes to disallow them – time that gives the celebrations the chance to play out and ripen, time that allows everyone the chance to settle into the new reality, to exult in the joy of victory or despair in the agony of defeat – before they are suddenly told: actually, forget all that, none of it counted.

There were 75 seconds between the moment Gabriel Jesus’s shot crossed the Tottenham line and the realisation of Manchester City’s players that their injury-time winner had been disallowed because the ball had brushed the arm of Aymeric Laporte.

In the technical area Pep Guardiola had turned to shoot a significant glance at Sergio Agüero, whom he had substituted for Jesus 25 minutes earlier. Agüero had not concealed his disgust with the decision and there had been a heated exchange. Now Guardiola seemed to be making the point: see Sergio, I don’t get everything wrong. Agüero realised it would now be expedient to compensate for his earlier public show of dissent with an equally public show of reconciliation. He made his way down to Guardiola and they stood in an awkward embrace, Guardiola whispering passionately into Agüero’s ear, Agüero’s face frozen in a pale, polite rictus. It all looked a little stilted, but at least Agüero was making the effort.

City’s goalkeeper Ederson had been out of position for Tottenham’s first goal, his only mistake in an otherwise perfect display, and it was going to cost his team two points. Riyad Mahrez had been sent on for Bernardo Silva with 10 minutes to go, he had failed with all his dribbles and lost the ball three times in good positions. For 75 seconds they drank from the cup of sweet, sweet relief, before it was suddenly wrenched away.

Seeing the players put through the emotional wringer like this was extremely entertaining for everybody except Manchester City fans, who can only console themselves with the thought that some day they will be the beneficiaries and not the victims of a ridiculous VAR call. The bigger question is why anyone would think these VAR calls – the type that led to dubious penalties being awarded out of the blue in the 2019 Champions League final and the 2018 World Cup final – represent an improvement on what went before.

The Premier League’s VAR policy is that the video referee is there to correct “clear and obvious” errors by the referee regarding goals, red cards, penalties and cases of mistaken identity. In theory VAR is only there to help, that’s why the acronym includes an A for Assistant. In practice VAR has taken over all the most important powers of the referee, who is now out there largely for show.

The regulations state that the on-field referee has the final say on every decision, but that is a blatant absurdity. In reality a referee would have to be very “brave”, in the Yes Minister sense of that word, to go against the “advice” of the video “assistant”. So the referee’s role is now largely ceremonial. See how Michael Oliver answered the protests of Gabriel Jesus and David Silva when the goal was disallowed: he pointed to his earpiece, drew a box in the air to indicate VAR, raised an arm vaguely towards the stands to indicate that the decision was out of his hands. “Don’t blame me – I’m just the ref.”

The problem with a formulation such as “clear and obvious” is that everything is clear and obvious in 4K ultra-slow-motion – even microscopic, unintentional infractions such as Laporte’s, which had not been noticed by any of the players or officials on the pitch. And once you have decided that even “fouls” that occur beneath the threshold of human perception should count, you have to call out all of them, in an inexorable logic of interfering, pointless pedantry.

One possible solution is for VAR to be applied through a tennis-style challenge system, where the on-field referee runs the match as before, and teams are given a limited number of opportunities to call for video review. Teams are usually pretty good at detecting when they have been the victims of an injustice: if nobody noticed the foul, then it probably didn’t matter. The challenge system might not be perfect but it would at least limit the number of VAR interventions, which under the dynamics of the present system seems likely to become ever more overbearing.

Whether or not you believe justice was served in the case of City’s disallowed goal, there was plainly no justice about the result. Spurs knew what City would try to do. They knew they would move the ball to Bernardo Silva on the wing, and that he would lure defenders towards him and try to find Kevin de Bruyne in the channel between Danny Rose and the Spurs centre-backs. But knowing it is not the same thing as stopping it.

On 20 minutes Harry Winks saw de Bruyne moving into that space and ran to mark him. De Bruyne let Winks run past him, then casually backed away a few paces, received the ball from Bernardo and hit a stunning cross to the far post that was headed in by Raheem Sterling. On 35 minutes de Bruyne moved again towards the space between Rose and the centre-backs. This time Winks did not follow him straight away; an intelligent player like him wasn’t going to make the same mistake twice in a row. So de Bruyne forced him to make the opposite mistake instead. He ran in behind the defensive line, with Winks arriving too late to cover, and drove in another sensational cross that Sergio Agüero casually flicked past Hugo Lloris.

By the 59th minute City had had 17 attempts on goal to Tottenham’s one, and you thought: if this is what happens when the third-best team in the league goes to Manchester City, there’s really not much hope for anybody else. Lucas Moura and the video referee combined to produce a big surprise. But if City keep playing like they did on Saturday, they won’t suffer many more nasty surprises.