3,000 seats empty for Legia Warsaw visit due to charge, which includes sectarian singing 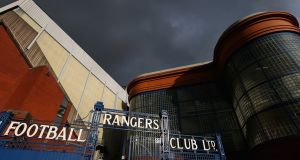 Rangers have been ordered to close a section of Ibrox for their return clash with Legia Warsaw after Uefa ruled some of their fans were guilty of “racist behaviour” — a charge which incorporates sectarian singing.

A club statement read: “Uefa has ruled that a group of Rangers supporters were guilty of racist behaviour — which includes sectarian singing — during the match against St Joseph’s at Ibrox on July 18th.

“Our supporters have been asked repeatedly by the club to refrain from indulging in this, and other forms of unacceptable behaviour. Sadly, the warnings have fallen on deaf ears and the actions of this minority will cause the club and the majority of good and decent Rangers supporters to pay a heavy penalty.”

Rangers confirmed “no fewer than 3,000” seats would be closed off, adding: “The area, or areas, to be closed will be announced in due course and the club will do its best to restrict the impact to supporters.

“Unfortunately a significant number of supporters, innocent of any wrongdoing, will be unable to attend next week’s match. This is deeply regrettable to all at the club and we hope that the guilty parties, who attracted the attention of Uefa, might reflect on the damage their unacceptable behaviour is causing Rangers and their fellow supporters.

“If any individual supporter is unable to behave in a civilised manner then please stay away from Ibrox and our club. You are harming Rangers and that is something a genuine supporter would never wish to do.”

King said: “Rangers has players and supporters from many religions, cultures and backgrounds but we are one and the same when we gather to support our club. If any supporter cannot accept that then Rangers is not the club for them.”

Rangers drew the first leg 0-0 with Legia in Poland on Thursday and manager Steven Gerrard later stated that his players needed “the four sides of the ground next week to get the place jumping and rocking”.