If you know your history . . . Ireland’s record in the playoffs 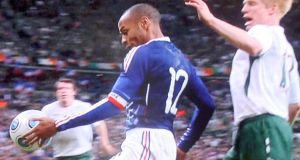 Ireland missed out on the 2010 World Cup thanks in part to Thierry Henry’s handball. Photograph: Credit Sky Sports

The Republic of Ireland’s last three appearances at major tournaments have come via the way of playoffs and, if Martin O’Neill’s men are to make it to Russia next summer, that number will have to become four.

While those three playoffs stand out as memorable occasions when Ireland came out on the best side, there has also been plenty of heartbreak along the way.

Let’s take a look back in time.

Ireland’s first playoff appearance was unusual in that it was played over three games and, originally, was supposed to take the shape of a three team group before Syria withdrew in protest at Fifa’s treatment of African teams.

This meant that the group instead became a two-legged play-off between Ireland and Spain which then went to a one off decider after Ireland had won the first leg 1-0 while Spain ran out 4-1 victors in the return tie.

As aggregate scores didn’t count in those days, the winner would have to be decided by way of a one-off match at a neutral venue. After much negotiation the location was decided to be Paris.

Once again this playoff took place as a one-off match at a neutral venue. This time it would be Anfield.

Ireland were up against it before the game even kicked off as Roy Keane and Steve Staunton both missed out with injuries while Niall Quinn was serving a suspension.

In the end it was a teenage striker by the name of Patrick Kluivert who would make the difference on the night, netting in both halves to secure a 2-0 win for Guus Hiddink’s team.

Ireland made a perfect start to the first leg of this playoff with Denis Irwin firing home a free-kick to give his side an early lead.

But Belgium came back into the game and Luc Nilis’ precious away goal after 30 minutes put the pressure hugely on Ireland for the second leg.

Ray Houghton’s goal early in the second half made the game 1-1 after Luis Oliveira had given Belgium the lead, but more importantly it discounted the away goal that the Belgians had scored in Dublin. The game was there for either side to take but it would end in controversial fashion as the officials became the main focus.

With 20 minutes to go Ireland were awarded a throw-in only for Austrian referee Gunter Benko to over-rule his assistant. The Irish defence was caught flat-footed, allowing Nilis to latch onto a cross and tuck the ball past Shay Given to send Belgium to France.

Robbie Keane’s goal 10 minutes before full-time in the first leg of the playoff looked to have given Ireland something to hold on to going to Bursa but a late Turkish penalty score by Tayfur would prove to be the turning point.

Just 100 Ireland fans managed to make the trip to the remote city of Bursa for the return leg and they failed to see their team ever really threaten.

In the end the game finished in chaos as Tony Cascarino was attacked by Turkish players and fans on the final whistle, sparking a brawl in the middle of the pitch.

This time around the luck of the draw had given Mick McCarthy’s side what would be considered one of the easier opponents in the pot and his players took full advantage of it.

The hard work was done in the first leg as Ian Harte and Robbie Keane scored to give Ireland a cushion to take into the second leg in which Iran only managed to score a late consolation and Ireland’s qualification was ensured.

Need any more be said? After a deflected Nicolas Anelka shot gave Les Bleus a 1-0 victory in Dublin, many feared that the dream of making the 2010 World Cup in South Africa.

But the Irish players weren’t going to give in that easily. What followed was one of the best Irish performances in years as Robbie Keane’s goal saw the Trapattoni’s side beat France 1-0 in Paris.

That sent the game to extra-time and what happened next is history. Florent Malouda’s free-kick into the box in extra-time was allowed to bounce and looked to be going out of play but Thierry Henry stuck out a hand to control it before squaring to William Gallas who bundled home and Ireland were out in the cruelest of fashions.

In Tallinn Keith Andrews opened the scoring with a header in the 14th minute before a Jonathan Walters strike and a brace from Robbie Keane sealed a comprehensive win for Ireland.

The home leg was now a formality and became even more so when Stephen Ward latched onto a Kevin Doyle header 30 minutes in to tap home. Konstantin Vassiljev struck from range in the second half to restore some Estonian pride but the party had already started in Ireland.

The opening game in the Bosnian city of Zenica proved to be both memorable and bizarre as a heavy fog meant fans in the ground and TV viewers could barely see what was happening.

However, in the 83rd minute – with the game locked at a tense 0-0 – Robbie Brady emerged from the fog to fire a shot into the bottom corner. Edin Dzeko equalised three minutes later but Ireland had the crucial advantage thanks to Brady’s strike.

The second leg was easier than expected with Jonathan Walters’ first half penalty, followed by a late volley setting Ireland on their way to France.