Ireland v Denmark: All you need to know about World Cup playoff

Irsk? Mig? Aldrig! - Three words you might need in Copenhagen on Saturday night 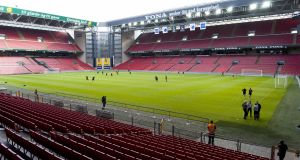 Around 2,400 Irish supporters will be in the away end at the Parken stadium for Saturday’s World Cup playoff against Denmark. Photograph: Lars Ronbog/Sportsagency/Lars Ronbog

The World Cup playoffs, that’s what. Where have you been?

Russia, next summer, if all goes well while the FAI would be richer by at least €11 million in guaranteed prizemoney plus money from sponsors but minus players’ fees and other bits and pieces. The exact figure is always hard to pin down but by the association’s standards, it’s a lot cash.

Great! What are our prospects?

Well, Martin O’Neill’s side was unseeded so on paper at least all four of the possible opponents were going to be ranked higher but the Danes are ranked ever so slightly lower than the rest and so, yeah, we’d have taken that, as they do like to say in football. Ireland are the underdogs, but not by that much.

Two games of 90 minutes with away goals counting double in the event of a draw overall. If that doesn’t decide things then 30 extra time potentially followed by penalties. The sides meet in Copenhagen on Saturday night then Dublin on Tuesday.

Great. Where do I get my tickets?

Sorry, a bit late for that now. Both games are sold out with many Irish fans, in particular, still scrambling about for tickets after having missed out. Around 2,400 will be in the away end at the Parken stadium this weekend but another 900, it is estimated, are travelling without tickets and there will be the usual representative of the diaspora all looking to get in with many buying tickets from locals and secondary websites. The Danish FA has said they won’t be admitted if they are identifiable so, everyone, after me: Irsk? Mig? Aldrig! (Irish? Me? Never!).

Okay, if I can’t make it, where can I see the game?

Both Saturday’s first leg in Copenhagen and next Tuesday’s return game in Dublin will be shown live on RTÉ2 and Sky Sports. Both games kick-off at 7.45pm. If you’re in Copenhagen you’ll need to leave the bar at 7.45pm for an 8.45pm kick-off.

And who will win?

It is, as they say, too tight to call.

And so who are their, ahem, danger men?

Christian Eriksen is the one that stands out. The Tottenham Hotspur midfielder might get a kick from reading all that has written about him in these parts over the past week or two but they also like him in Denmark, where one paper this week estimated that he is worth almost as much of the whole Irish team.

And who are ours?

James McClean has probably been the key man in the campaign, he has scored four goals, Daryl Murphy has three but Eriksen has eight so the motto for the moment might be You’ll never beat the Irish with O’Neill just hoping that he still has everyone available for the second game.

Why, are they going somewhere?

Well, several are already gone. Séamus Coleman, Jon Walters and James McCarthy are injured while David Meyler is suspended. He will be back for Dublin but others could be out if they get add to the yellow cards they already have from previous games or actually get sent off.

In addition to Coleman and Walters, Ciaran Clark, Darren Randolph, Shane Duffy, Cyrus Christie, Stephen Ward, Daryl Murphy, James McClean, Harry Arter, Glenn Whelan and Aiden McGeady are all on bookings. The Danes, though, are not far behind with nine of their players also at risk.

I’m confident now, when will the draw for the World Cup take place?

There won’t be too long to wait after the playoffs, with the draw for next summer’s finals taking place in Moscow on Friday, December 1st.

1 Gerry Thornley: Ireland don’t want to box themselves into a corner
2 Owen Doyle: Ireland suffered from officiating of the breakdown
3 Thomas Galligan and Cavan raring to meet Dublin in Croke Park
4 Kevin McStay: Maybe a knockout All-Ireland Championship is the long-term solution?
5 No further players to be called up to Ireland squad to face Georgia
Real news has value SUBSCRIBE
Crossword Get access to over 6,000 interactive crosswords