Neil Warnock on Brexit: ‘To hell with the rest of the world’

Cardiff manager Neil Warnock has criticised the UK Government’s handling of Brexit negotiations and admits he cannot wait to get out of Europe. Video: Sky Sports News 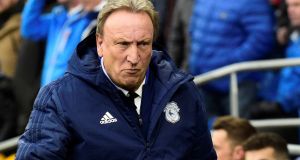 Cardiff manager Neil Warnock has criticised the Government’s handling of Brexit negotiations and admits he cannot wait to get out of Europe.

Asked whether the UK’s exit from the European Union — due to formally occur on March 29th — will harm the chances of Premier League clubs buying players from abroad, Warnock launched an attack on Prime Minister Theresa May’s failure to deliver on the 2016 referendum result.

“I think once the country knows what they’re doing, it will be straightforward (to make signings),” Warnock said after the 0-0 home draw with Huddersfield.

“Any transfer window is difficult for me, not just this one.

“I don’t know why politicians don’t do what the country wants, if I’m honest.

“They had a referendum and now we see different politicians and everyone else trying to put their foot in it. Why did we have a referendum in the first bloody place?

“I can’t wait to get out of it, if I’m honest. I think we’ll be far better out of the bloody thing.

“In every aspect. Football-wise as well, absolutely. To hell with the rest of the world.”

Warnock’s comments might raise eyebrows at Cardiff, both at boardroom level and in the dressing room.

Cardiff are owned by Malaysian businessman Vincent Tan and chief executive Ken Choo is also from that country, while chairman Mehmet Dalman was born in Cyprus.

Warnock also has a cosmopolitan dressing room with Canada, Denmark, Gabon, Iceland, the Ivory Coast, the Philippines, the Republic of Ireland and Spain represented in his squad, as well as players drawn from the home nations.

The 70-year-old has been frustrated in attempts to sign foreign players during the January transfer window, with Cardiff confirming bids have been made for Nantes striker Emiliano Sala and Nice midfielder Adrien Tameze.

“But we thought we had a midfielder (Tameze) signed last week and that fell through.

“I don’t think you can say anything until they’re actually sat in your office signing the papers.

“Agents get a sniff elsewhere, with better deals. That’s the job we’re in at the minute.”