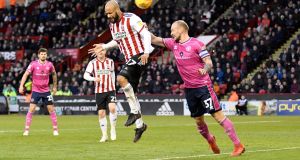 Irish forward David McGoldrick headed the winner as Sheffield United beat QPR 1-0 to move up to second in the Championship.

The former Ipswich striker scored for the fifth time in his last six league games, in the 37th minute, to ensure the Blades cut the gap on leaders Leeds, who beat Derby 2-0 on Friday night, to four points.

Dwight Gayle netted his 14th goal of the season early on, but Jordan Rhodes came off the bench to rescue a point for City in the 83rd minute.

Middlesbrough maintained their position in the top six with a 2-1 win at play-off hopefuls Birmingham.

Jones left Luton to replace the sacked Gary Rowett earlier this week, but Stoke were 2-0 behind inside 17 minutes following an own goal from Ryan Shawcross and Said Benrahma’s effort.

Benik Afobe gave the visitors hope only for Rico Henry to seal the points for the Bees in the 54th minute.

Life after Aitor Karanka started terribly for Nottingham Forest with a 2-0 defeat at Reading.

The Spaniard left the City Ground on Friday and nine-man Forest missed the chance to close the gap on sixth-placed Derby as the Royals moved to within two points of safety.

John Swift’s effort and an own goal from Jack Robinson secured Jose Gomes’ first win as boss and, to make matters worse for Forest, Danny Fox and Tendayi Darikwa were sent off in the second half.

Jarrod Bowen continued his stunning goal-scoring form with a brace in Hull’s 3-0 victory over Sheffield Wednesday.

The forward took his tally to nine in his last eight league games and Fraizer Campbell added a third to secure the Tigers a sixth consecutive win.

Aston Villa wasted the opportunity to make ground on the play-offs after a 3-0 defeat at relegation-threatened Wigan.

Will Buckley put Wanderers ahead in the 58th minute, but Matty Taylor and debutant Kasey Palmer came off the bench to turn the game around in the space of three minutes.

Ipswich moved within seven points of safety courtesy of a 1-0 triumph over fellow strugglers Rotherham at Portman Road, where on-loan Hull striker Will Keane netted the winner.

Courtney Baker-Richardson netted the opener for the Swans at Deepdale and, after Johnson replied, Preston substitute Joshua Earl was sent off for a second booking.