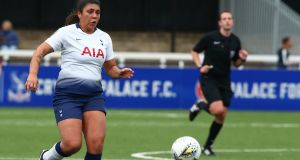 The unnamed Sheffield United Women player accused of making monkey noises at Tottenham Ladies defender Renée Hector faces being sacked by the club if allegations of racism are proved, the Guardian understands.

The Football Association’s integrity team has started an investigation into the alleged incident during Spurs’ 2-1 win on Sunday, and will speak to the match official and key witnesses over the coming days. Sheffield United are conducting their own investigation and, while not wanting to prejudice proceedings, are clear that such behaviour – if proven – is not tolerated.

Hector reported the monkey noises to the referee during the game and afterwards the 23-year-old wrote on Twitter: “Such a shame that racism seems to be rising up again in football – I received some monkey noises from an opposition player. The only reaction was to let the football do the talking and that we did great start to the year!”

After the match Tottenham reported the incident to the FA, who later released a statement saying: “We are aware of an allegation of discriminatory abuse during the FA Women’s Championship match between Sheffield United Women and Tottenham Hotspur Ladies on Sunday, 6th January.

“We take all allegations of discrimination very seriously and will be making enquiries into the matter.”

A Sheffield United spokesperson confirmed the club was aware of Hector’s post on social media. “We are aware of the post and have already begun an investigation to determine the full facts,” the spokesperson said. “As this is an ongoing matter, it would be unwise to comment further at this stage.”

Racing continues at Level 5 while bookies have to close