Everton weather the storm to see off Bournemouth 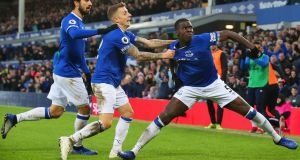 The impassioned reaction of Marco Silva to Dominic Calvert-Lewin’s cool finish said it all. Everton had been under serious pressure from Bournemouth, as had their manager after Farhad Moshiri’s comments at the club’s general meeting in midweek, when the substitute confirmed a first home league win in five matches in stoppage time. Relief and joy poured from Silva on the sidelines.

Everton overcame a quiet start to claim a hard-earned victory courtesy of Kurt Zouma’s first goal for the club and the substitute’s measured finish from Ademola Lookman’s inviting cross. The combination of two youngsters for the winning goal could not have been better timed for Silva in a week when he spoke of laying foundations for the future but the club’s majority shareholder voiced displeasure over the league table.

Their current position of 10th will not be cause for celebration given Moshiri’s ambition and level of investment, but there was no overstating the importance of this victory. Eddie Howe’s visitors started and finished strongly but departed only with regret.

A side issue raised from the floor at the general meeting concerned the subdued atmosphere at Everton’s recent home games. Their failure to win one in the league since 24 November might have had something to do with it. Marcel Brands, the club’s director of football and board member, expressed surprise at how quiet Goodison was during the home defeat by Leicester. Moshiri interjected to say it was the team’s responsibility to lift the crowd.

The instruction was not relayed. Everton took 31 minutes to create a chance of note against a Bournemouth side that had lost 10 of its last 13 games and was missing the injured Callum Wilson, a rumoured target for Chelsea. For the first half an hour they posed no threat whatsoever to Asmir Begovic’s goal and appeared to have no clear idea of how to do so. Richarlison returned to the lone striker’s role in the absence of an established alternative but to limited effect.

The visitors controlled the early exchanges, showing not only greater urgency and purpose but a commitment in the challenge that Everton lacked. Erratic distribution from Jordan Pickford and his defenders offered Bournemouth further encouragement of the chance at first away win since October.

Howe’s team could have been two goals ahead before Everton finally stirred with a third of the game gone. Josh King had the first genuine opportunity of a wet and windy afternoon when Ryan Fraser’s low cross from the left found him yards in front of Pickford’s goal. The striker was unable to connect cleanly and the England goalkeeper gathered comfortably.

Pickford was beaten minutes later when Zouma lost possession following what he claimed was a foul by King. The referee Anthony Taylor, not the most popular figure with either set of supporters, was unmoved and Junior Stanislas played David Brooks through on goal. Brooks placed his shot beyond Pickford only to watch in disbelief as the ball struck the inside of the far post and rebounded perfectly for André Gomes to clear. The Wales international was also denied a penalty claim when challenged by Idrissa Gana Gueye as he weaved his way into the Everton area.

Bournemouth continued to test the hosts’ fragile rearguard, one that had not kept a clean sheet in nine matches, and Stanislas forced Pickford into another save with a low free-kick from 20 yards.

Everton, their fans growing increasingly restless and their manager increasingly angry, began to match their opponents for aggression and accuracy in possession as the interval approached. The performance was transformed as a result. Bernard headed their first chance wide from an inviting cross by Séamus Coleman and just failed to connect with a Lucas Digne delivery from the opposite flank. Michael Keane headed against the top of the crossbar from another inviting cross from the France full-back.

The second half opened in a similar vein with the growing influence of Bernard, Gylfi Sigurdsson and Gomes ending Richarlison’s isolation. The Brazil international went close to opening the scoring when, after his initial header had been blocked by Jefferson Lerma, his rebound was blocked on the line by the knee of Nathan Aké.

Digne was responsible for creating the breakthrough with another perfect left-wing cross after Lerma had headed clear from a Sigurdsson corner. The left-back controlled beautifully to take himself away from King and floated an inviting delivery to the near post where Zouma powered a header inside Begovic’s top right-hand corner.

Gomes, already booked for dissent, was fortunate to escape a second yellow card for a foul on Steve Cook. He also felled Stanislas and clipped Lerma around the head without sanction from Taylor and Everton endured a nervous finale as Bournemouth pressed for an equaliser. It almost came when King flicked on Fraser’s corner, but Pickford held on. Seconds later their hopes of a recovery were extinguished thanks to the perseverance of Lookman.

The young winger regained possession from Adam Smith while grounded and was then sent clear down the left by Gueye. Lookman sized up his options and pulled the ball back for Calvert-Lewin who side-footed into the bottom corner via a slight deflection off Aké. Relief consumed Goodison – the technical area in particular. – Guardian service