Rashford ‘touch and go’ to play again this season – Solskjær 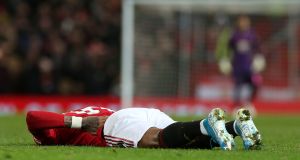 Marcus Rashford’s chances of playing for Manchester United again this season are “touch and go”, according to Ole Gunnar Solskjær who said the striker’s back injury is more severe than first thought. It leaves Rashford’s participation at Euro 2020 in doubt.

Rashford sustained a double stress fracture in the FA Cup win against Wolves in January and Solskjær was asked whether the 22-year-old’s chances of featuring for United were rated 50-50. “I would hope he’s playing this season but it’ll just be touch and go towards the end,” the manager said in the buildup to the Europa League last 32 first leg at Club Brugge on Thursday night.

“Hopefully we can get through this tournament and prolong the season. I’m not a doctor but obviously I was hoping he would recover quicker. It actually looks like he’s going to be out another few months definitely.”

Solskjær admitted the initial diagnosis was wrong. “He had a scan and it was maybe more severe, that fracture, than what we hoped and expected because he felt fine the few days before that. I’ve never had anatomy in school so I didn’t know it takes that time to recover. When he recovers and it heals he’ll be stronger for it, so it’s important we won’t rush him. And we won’t do that.”

Gareth Southgate has to submit his England squad for the European Championship by June 2nd and the last possible club game of the season for Rashford would be the Europa League final on May 27th. Solskjær said regarding Euro 2020: “I would hope he plays before then but we’re not sure, so if he’s not fit enough he won’t go.”

Solskjær’s more immediate focus is the Europa League. Manchester City’s two-season ban from Europe means that, pending an appeal, this season’s fifth-placed Premier League side will qualify for the Champions League. Yet Solskjær, whose side are two points from fifth place, insisted he is intent on winning the Europa League, which gains a berth in the elite competition.

“At the moment we’re talking about this tournament and we want to go through. We dream about winning this tournament. It will give us a chance but we have to improve and get better.”

United won the Europa League three years ago under José Mourinho, who began to make it a priority in the season’s closing stages because of the volume of games. Solskjær did not rule out doing the same if needed. “I hope we can get through and have that problem. I have a squad with two players in each position; I can rotate but it is important we keep the consistency. I would rather have too many games than not enough.”

Solskjær is unhappy United have had only three days between the 2-0 win at Chelsea on Monday and the game on Thursday night with Brugge, who lead the Belgian league by nine points after finishing second last season.

“It does have a big impact because two days’ recovery is not a lot. Especially as we had two weeks to prepare for this spell [because of the winter break]. Now, we’ll have seven games in 21 days, starting Monday and ending Sunday against City [on March 8th], a game every three days.

“But we have a big squad, we have travelled here with 19, and I have to make use of the squad. You would want a game on Saturday before a Thursday, especially when we had 16 days off. But we can’t complain, it is what it is. I just mentioned it because it’s not the best preparation but these boys are brilliant – they are young, fresh, and recover quickly.”

Solskjær was asked whether he regretted missing out on Erling Braut Haaland in January, the 19-year-old striker who joined Borussia Dortmund, where he is impressing. “I normally never comment on opposition players but since I’ve had Erling [when the manager of Molde] I’m delighted for him. For Norway it’s brilliant we have a striker who can score goals again.”

Scott McTominay trained with the United squad on Wednesday for the first time since recovering from a knee injury but did not travel.

1 A beautiful, happy accident - Moneyball is the best sports movie ever
2 Matt Williams: We all need a bit of Bud Maher’s resilience right now
3 Reality Bites – Tales from the new normal: Caitríona Cormican
4 James McClean still failing to learn his own online history lesson
5 Is it time for the New England Patriots to tear it down and start again?
Real news has value SUBSCRIBE
Crossword Get access to over 6,000 interactive crosswords