Mané was withdrawn as Liverpool boss says he was targeted 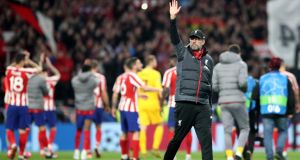 Jürgen Klopp admitted he substituted Sadio Mané during Liverpool’s Champions League defeat at Atlético Madrid for fear the Senegal forward would be sent off after being targeted by Diego Simeone’s players.

The influential Mané was withdrawn at half-time during the 1-0 defeat having received a booking late in the first half for catching Sime Vrsaljko with a flailing but accidental arm.

Several Atlético players surrounded the referee asking for a second yellow card when Mané was caught up in an innocuous incident moments later, and Klopp confirmed the striker was replaced by Divock Origi as a precaution. Mané’s speed and penetration were sorely missed as Liverpool failed to register a shot on target at Estadio Metropolitano.

“It is obviously a part of football that I don’t like,” said Klopp. “The plan tonight was to get Sadio out of the game with a second yellow card. I was afraid that Sadio’s opponent would go down if he took a deep breath on him or something. I don’t want to have this situation and that is why I took him off.”

Jordan Henderson was replaced with a hamstring injury and will be assessed on his return to Merseyside.

Saúl Ñíguez’s early goal gave Atlético a win that was wildly celebrated by their players and fans, and Klopp believes the intensity of the home crowd will be matched by what awaits at Anfield in the home leg on March 11th.

The Liverpool manager added: “Yes, there were things we could have done better and things that could have made our life easier. Atlético very obviously were here to squeeze a result out of this game and against that our pressing was exceptional, our buildup was outstanding, our counter-press was exceptional.

“The intensity was exactly how it should be. We had not enough clear-cut chances, that is how it is. We had chances but not enough. We had games in atmospheres like this where we lost focus a little bit and they could score a second one. It didn’t really look like that tonight. I say to all the Atlético fans who are lucky enough to get a ticket for the second leg: welcome to Anfield. It’s not over yet. That’s the only thing I feel.”

Andy Robertson insisted Atlético were wrongly awarded a throw-in in the buildup to the winning goal. The Liverpool defender said: “The officials made a mistake and the corner is just a ricochet. We gave them the best possible start to get their fans up and then they started falling over and trying to get under our skin but we handled it well.

“They were falling over easy but we got on with it and we are better than that. It was a decent performance but we have a second leg to put it right. They celebrated as if they had won the tie. But let’s see. We have some weeks then they come to Anfield. We know our fans will be there so it is up to them to come as well.”

Simeone, the Atlético coach, said his players were roused by the impassioned reception they received from their fans on arrival at the stadium.

“I think we started winning the game when our bus turned at the roundabout and we saw the reaction of the people. It enthused us. Something beautiful woke up in us,” he said.

“The feeling that came out of the people, the reply of the people, I’ve rarely seen from our fans at this level. They were there the whole game. It made me want to put my boots on and go on the pitch.”