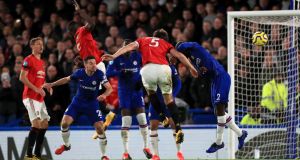 Remove the technology and Chelsea might have taken a tighter grip on fourth place. It is a point worth keeping in mind when it comes to analysing Manchester United’s fourth victory against another member of the Big Six this season, even if Ole Gunnar Solskjær was entitled to celebrate a disciplined defensive display, Bruno Fernandes’s first assist in a red shirt and the sight of Anthony Martial stepping up in the absence of Marcus Rashford.

Frank Lampard could not believe his luck. First he thought Kurt Zouma had cancelled out Martial’s clever opener for United, only for the VAR to detect a slight foul on Brandon Williams. Later Chelsea’s manager would seethe when Olivier Giroud had another strike ruled out for the tightest of offsides and, to add insult to injury, Lampard could justifiably point out that Harry Maguire should not have been on the pitch to score United’s second goal.

Not that Chelsea, who have won four of their past 14 league games, could have too many complaints. Their fifth defeat on home soil this season leaves them a point above Tottenham before hosting them on Saturday and three points above an average United side. Sheffield United are two points back in sixth place and on this evidence it is just as well that Manchester City’s troubles with Uefa means that finishing fifth could guarantee Champions League football next season.

At times it was hard to believe these sides once went head to head for the highest honours. Chelsea’s attacking edge was blunted by the absence of Tammy Abraham, who has an ankle injury, and there were hints of anxiety when N’Golo Kanté went down injured in the 12th minute. Losing the midfielder to yet another injury was the last thing Chelsea needed before home games against Tottenham and Bayern Munich to come in the next week and it hardly helped Lampard’s mood when his attempts to make a quick substitution were undermined by Mason Mount’s dithering on the bench. Jody Morris, Lampard’s assistant, was less than amused as Mount rushed to get ready.

It was that kind of game for the first 20 minutes – bitty, stop-start, unfocused – and for a while the only flashes of class came from Mateo Kovacic, who caught the eye with some graceful runs beyond United’s midfielders.

Then again, it was not in United’s best interests for the contest to become stretched and ragged. Solskjær’s 3-4-1-2 was designed to frustrate and the visitors fancied their chances of catching Chelsea on the break, even though there were few hints a goal was on the way before Martial headed them into the lead on the stroke of half-time.

The opening period had drifted by before the goal. Bruno Fernandes, handed a free role, was operating on the fringes and Daniel James had scuffed disappointingly wide after bursting clear on the left.

Chelsea remain callow in the decisive areas. Their lack of ruthlessness gives opponents a chance, especially at home, and they fell behind when Aaron Wan-Bissaka, cutting inside from the right, swung in a cross for Martial to meet with a clever header that skimmed beyond Willy Caballero, picked again in goal instead of Kepa Arrizabalaga.

It was a sucker punch. The brighter football had come from Chelsea, with Reece James and Willian combining well on the right and firing early efforts narrowly off target from the edge of the area and the temperature rose when Michy Batshuayi and Harry Maguire set off in pursuit of a loose ball in the 20th minute. A little shove from Batshuayi sent Maguire sprawling and the United centre-back was fortunate that a VAR review did not deem him guilty of violent conduct after kicking out at the Chelsea forward.

Aggrieved not to be playing against 10 men, Chelsea briefly raised the tempo. Pedro dashed down the left and crossed for Batshuayi, who stabbed wide from 12 yards.

Moments later Willian went over when Fernandes hung out a leg. The Brazilian was booked for diving and the half ended with Batshuayi fluffing another opening, dragging wide from a tight angle.

Andreas Christensen was struggling with a knock in the moments before losing Martial when United went ahead and the centre-back was replaced by Zouma during the break, further stretching Chelsea’s resources. The absence of Callum Hudson-Odoi and Christian Pulisic limited Lampard’s options on the flanks, forcing him to rely on Willian and Pedro, while Batshuayi’s shoddy hold-up play was making life easier for United’s back three, where Eric Bailly was looking understandably rusty on his first start since last April.

It was not Chelsea’s night. When Pedro’s close-range effort was deflected wide Zouma equalised from the resulting corner, lashing a meaty volley past David de Gea. Unfortunately for Chelsea, Williams was lying face down in the grass and United were appealing for a foul. Off it went for another VAR review, which showed that César Azpilicueta had given Williams a little shove at the near post. No goal – even though the replays also suggested Fred had pushed Azpilicueta first.

The identity of United’s second goalscorer felt like another slap in the face. Fernandes lifted in a corner and Maguire rose highest, leaping above Antonio Rüdiger before pounding his header beyond Caballero.

Giroud came on for Batshuayi and the striker, who was denied a move away from Chelsea last month, thought he had pulled one back with a finish from Mount’s cross. VAR had other ideas. – Guardian