Mourinho expects Son to miss rest of the season 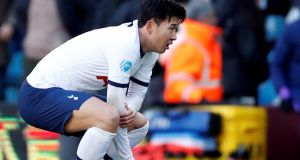 Son Heung-min of Spurs holding his arm during the match against Aston Villa at Villa Park, Birmingham, on Sunday. Photograph: Reuters/Andrew Boyers

José Mourinho expects Son Heung-min to miss the rest of the season with a fractured arm, and has said that Tottenham’s selection crisis in attack could not be worse before they host RB Leipzig in the last 16 of the Champions League.

Son hurt his right arm during the early stages of Spurs’ win over Aston Villa on Sunday, and although the forward completed the game and scored twice he requires surgery on an injury which leaves the club desperately short of options up front.

Harry Kane is not expected to return from a torn hamstring until mid-April, and Mourinho struggled to hide his disappointment as he prepared for Wednesday’s first leg against Leipzig, saying that the bad news about Son had left his players with broken hearts.

Shortly after a club statement said that the South Korean would be out for a “number of weeks”, Mourinho said: “I’m not going to count on him again this season. If he plays two or three games then it’s because he [the press officer] is very optimistic, but I’m not counting on him.

Mourinho is likely to use Lucas Moura as a stand-in forward against Leipzig – the manager said that 18-year-old Irish striker Troy Parrott was not ready to make an impact at this level – and Dele Alli, Steven Bergwijn and Giovani Lo Celso will be expected to support the Brazilian.

The challenge for Spurs is finding a way to play without Kane and Son, although it helps that their German opponents have a crisis of their own in defence. Dayot Upamecano is suspended and Ibrahima Konaté and Willi Orban are injured.

Yet Leipzig, a point behind Bayern Munich at the top of the Bundesliga, will provide an awkward test. They are managed by Julian Nagelsmann, a gifted 32-year-old, and the prolific Timo Werner is the danger man up front.

Mourinho, who has not won a Champions League knockout tie since 2014, expects it to be tough. Yet when he replaced Mauricio Pochettino in November, Spurs were 12 points behind fourth-placed Chelsea. The lead is down to one point before Spurs visit Stamford Bridge on Saturday.

“Now we are in trouble. We are with our arms on the balcony on the fourth floor and now we have two options: one is to give up and fall and normally die because it’s the fourth floor. Another way is to fight with what we have – no stairs, but arms.

“We are going to be on that balcony fighting with everything that we have, and there is only one possibility of help in this incredible fight we have ahead of us: our public. No strikers, no market, no players, nothing. The only help we can have now, especially playing at home, is our crowd.”

Last season’s beaten finalists looked for cover for Kane in January, but attempts to sign Krzysztof Piatek, Olivier Giroud and Willian José ended in frustration. “Analogies apart, are we going to give up or are we going to fight?” Mourinho said. “We know that it’s very unfair for the players because they recovered the 11 points to fourth position in the Premier League.

“Not two, three or four, 11 points and when they arrive in this moment full of hope, with that challenge in the Premier League, knockout stages of the Champions League, last 16 in the FA Cup, we put ourselves in this privileged situation and yesterday the bad news, the first thing was to break our hearts and the second thing was to break our team.