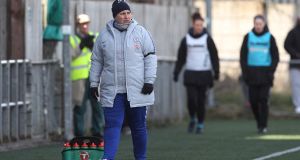 Chelsea Women’s manager Emma Hayes has noted a link between her players’ being on their periods and a dip in performance. Photograph: Getty Images

It is an odd word that makes a lot of people cringe and maybe internally scream, and in advance, sincere apologies to anyone who is that tad bit squeamish. We all know physically, and biologically men and women are different.

We all know that certain aspects can undoubtedly overlap when it comes to sport, like skillset, and tactics, but there are many differences, such as physical strength, potentially speed, rehabilitation, workouts and all the other things that can make you a top athlete.

But if I was to say that one squeamish word could potentially revolutionise the women’s game, a lot of eyebrows would be raised.

Yes, ladies and gentlemen, that word is periods.

For context, Chelsea Women’s Football Club are now involved in a revolutionary training programme that involves linking all the sessions to the menstrual cycle. My favourite quote from Emma Hayes, Chelsea manager, was when she was describing a game between Chelsea and Arsenal in 2016 how a lot of the team were on their periods and the signs of fatigue and sluggishness were visible, and the team were second best to everything.

On top of that, factoring in menstrual cycles to training can help with specific injuries. It’s believed women are two to 10 times more likely to be felled by the dreaded anterior cruciate ligament injury compared to their male counterparts. As oestrogen levels peak during menstruation, so too does joint flexibility, which may explain why the number of female athletes who have suffered ACL injuries is so high.

While research in this is incredibly limited and just at the start, it is hoped that the more teams and athletes that factor in menstruation, the better and more concrete the evidence will be.

The impact that this could for women of all shapes, sizes and types could be huge and also be transformative in the professional sporting world

But periods and menstrual cycle trackers are not just solely about what happens once a month. The FitrWoman app was developed by former long-distance runner and physiologist Dr Georgie Bruinvels with sports science company Orreco. The app is tailored to track every day of the cycle to get benefits, no matter what stage you are at.

For example, in phase one of the cycle, it is recommended that athletes eat anti-inflammatory foods, exercise with pilates and yoga to help with muscle flexibility, especially in the lower back region. Phase two means there’s a higher risk of soft tissue damage, so less sharp directional changes, more a healthy balanced diet.

While the FitrWoman app details how athletes can tailor their training to their cycle, women who are involved in recreational and straightforward exercise can also benefit from it. Usually, I hated doing anything while on my period, I was incredibly irritable to the point where my family and I would barely glance at each other in case I ate one of them without salt.

And also, I hated that person who would tell me exercise would help. Give me all the bags of Taytos and bars of Dairy Milk and Netflix. There was zero chance I was leaving my lovely and comfortable beanbag.

Then, I started yoga. Eventually, I knew that time of the month would come around, and the poor yoga teacher would have her strength tested and her desire and spirit broken by an angry and irritable Joanne. I dragged myself to the studio and reluctantly put on my cute workout gear and braced myself for the worst. After 15 minutes, I was becoming that person I always hated. Annoyingly, the yoga was working, my back felt better and more flexible, my cramps were easing and my mood, dare I say, was actually on the up. The only disappointment is I still don’t look like a Victoria’s Secret model.

So, while people feel worried and rightly anxious about their period and wonder have I, along with Chelsea FC, become one of those preachers, it’s important to try. Try to breakdown the stigma and awkwardness when it comes to periods and the menstrual cycle. Try to discuss it with a close friend or someone you trust. Try to use your menstrual cycle as a tool to help you power on, rather than feeling sluggish and irritable.

While it will take some time to break down barriers and to stop everyone from squealing at the pure sight of the word, menstruation affects the vast majority of the female population for up to 40 years of their lives. While the education and conversation around it are incredibly taboo, awkward and hush hush, women’s sports, recreational athletes and all those could potentially start the conversation.

While technology also has a huge role to play, solidifying the data, research and findings are absolutely crucial, the impact that this could for women of all shapes, sizes and types could be huge and also be transformative in the professional sporting world.

The 0.5 to 1 per cent difference could be absolutely crucial in determining if you are a winner or not.