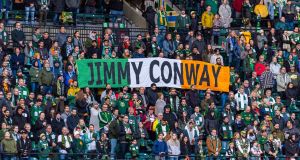 Portland Timbers supporters unveil a flag in tribute to their former player Jimmy Conway ahead of the game against the Vancouver Whitecaps at Providence Park in Portland last Saturday. Photograph: Diego Diaz/Icon Sportswire via Getty Images

A scroll through a newspaper archive unearths a black and white photograph from the hirsute 70s heyday of the North American Soccer League. In it, the Portland Timbers’ Jimmy Conway is leveraging his five foot eight frame into the air by clambering all over the shoulders of Toronto Metro Croatia’s Ray Treacy.

There are so many other telling snapshots of his career in Portland. Here’s him in a 50-50 with the New York Cosmos’ Franz Beckenbauer. There he is lining up alongside Robbie Rensenbrink for that season in the Pacific North-West when he and the Dutch icon were the team’s creative hub. One press clipping captures him as the lone scorer on a forgettable afternoon when the Los Angeles Aztecs’ Johan Cruyff tore the Timbers apart, another of a later vintage has him in the remote outpost of Billings, Montana holding a coaching clinic, trying to plant seeds in the barren heartland.

Following Conway’s death at the age of 73 last week, most obituaries outlined the bare details of what was a decent professional career. A teenage starlet at Bohemians where he was briefly introduced to an ill-fated carpentry apprenticeship, a stalwart for over 300 games at Fulham (the only non-English player to feature in the 1975 FA Cup final) and scorer of the goal that clinched second place in the 1977 title race for Manchester City.

There were 20 Ireland caps too, won during that decade of underachievement straddling the 60s and 70s, a period when those bent on improving the team’s fortunes were often hindered by the amateur bureaucrats in the FAI.

Yet, there was much more to this particular football life than all that. In and around Portland, the tributes started with his contribution to the Timbers but broadened to encompass the more enduring impact he made over decades coaching schools, youth and college teams in the region.

The latest iteration of the Timbers is one of the best supported outfits in Major League Soccer, the area is now regarded as a hotbed of young talent, and when credit is being attributed for this growth, Conway is one of those routinely recognised. Witness him being inducted into the Timbers’ Ring of Honour three decades after he first arrived.

“Jimmy was an incredibly selfless and giving human being and just a role model to everyone involved in the sport,” said Gavin Wilkinson, the Timbers’ general manager, last week. “With Jimmy, it was never about what he could get out of it, but how it would benefit others and benefit the sport. It sounds a bit cliché, but he was all about spreading the love of the game, educating people and teaching the right way to play. He was truly unique.”

One of twelve kids raised in a two-bedroom house in Cabra West, five of the six Conway brothers eventually togged out for Bohs, the club he left for Fulham at the age of 20 in 1966. That he was still playing indoor professionally in Portland 17 years later spoke to his passion for the game as well as his attitude.

Unlike the Dutch team of the 70s (whose carousing became part of NASL legend), he eschewed partying and team-mates were always shocked when on trips to New York he refused to accompany them on visits to the infamous Studio 54.

“Perfect Peter”, as they nicknamed him for his teetotal ways, is survived by his wife of 50 years, Noeleen, who he met on a blind date in the Crystal Ballroom on South Anne Street, and their three children (his son Paul played a few seasons with Carlisle United).

“Would you like to go live in America?” he asked his wife after injuries ended his time at Maine Road.

“Hey, big adventure, why not?” she replied.

Since his initial diagnosis with dementia back in 2009, Noeleen situated his plight in the context of how many of his peers from that era, nearly half the England team that won the 1966 World Cup for starters, who are now suffering similar afflictions or some form of Alzheimer’s. To that end, the family is reportedly going to donate his brain to Boston University, the pre-eminent unit investigating Chronic Traumatic Encephalopathy (CTE), and, in lieu of funeral flowers, asked friends for donations to that institution’s research programme.

“I’m absolutely convinced, beyond a shadow of a doubt, that soccer is what caused his condition,” she said. “The doctors can’t definitively say, but I’m 100 per cent convinced.”

When he became so sick that he was living at Oregon State Hospital, one of Conway’s former Portland team-mates used to visit and take him out the back to a swatch of green grass. A ball would be sourced from somewhere and then, Mick Hoban stroked it back and forth with his old pal.

Mostly, the Dubliner responded through muscle memory but, every now and again, there might be a teasing, flickering recognition in eyes long since glazed over by the most insidious of diseases. And suddenly, for that fleeting moment, he was what he had always been, a boy from Cabra with a ball at his feet.

1 Gerry Thornley: Changes to tackle laws could transform rugby by time of next World Cup
2 Sky Sports customers set to save on bills until Premier League returns
3 My favourite sporting moment: Phil Mickelson’s miracle shot at the 2010 Masters
4 Five newly-released sports books to read over the coming weeks
5 GAA: To date 2020 has been an imperfect view but there are pointers
Real news has value SUBSCRIBE
Crossword Get access to over 6,000 interactive crosswords