Mick McCarthy: Ireland will reach Euro 2020 if they beat Slovakia 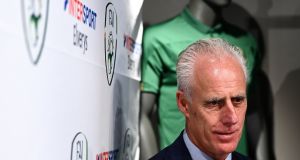 Mick McCarthy is confident Ireland will reach Euro 2020 providing they can beat Slovakia in their play-off semi-final. Photograph: Stephen McCarthy/Sportsfile

Mick McCarthy remains deeply wary of a Slovakia team he says will test Ireland in Bratislava, but the manager is adamant that if his players can win that game then they will go on to qualify for the European Championships, regardless of who they face in the play-off final.

The manager, who was in Dublin on Monday for the launch of what is now the Elverys Intersport FAI Summer Soccer Schools, said he will stick with the tried and trusted members of a squad that has, he believes, done well to get this far, not least because of their proven ability to cope with the sort of pressure that the play-off final might bring.

Beyond that, he says, he will worry about it when he has to but he expressed surprise at the suggestion that he or any of his favoured starters might be fazed by another make or break night at Windsor Park.

“I’m not going to be intimidated going to Windsor Park to be quite honest and I don’t think the players are going to be,” he said.

“If that’s where the players are going because [we’ve beaten] Slovakia and they’ve beaten Bosnia, then brilliant. But if Darren Randolph and the Doc or Seamus and Duffer and John Egan and Enda Stevens, all those boys, Glenn Whelan are getting intimidated by going anywhere, then we’ve got a real problem and I don’t think that’s the case. Although it might be the case if we’ve got kids playing.”

The last bit was a reference to repeated questions about Troy Parrott and other younger players who had made it to the margins, or beyond, of his squad towards the end of last year.

Parrott’s failure to get away from Tottenham on loan or get first team football at the London club had, he pretty much made clear, ended his chances of featuring in Bratislava while the likes of Aaron Connolly and Adam Idah would need to be playing more than they have been of late, in order to pose a serious selection dilemma.

He acknowledged the strong form of players like Jayson Molumby, who is on loan to Millwall from Brighton, but said that a major championship play-off game is not the place to make making a senior international debut.

“I understand the questions when they’re doing well in the Championship and he played well yesterday,” he said of the 20 year-old from Waterford. “They’re really pleased with him at Millwall. Strangely enough, though, I understand the size of the task making your debut as a senior international. And I made it as a hard-nosed pro.

“What was I? 25? With nearly 300 league games under my belt; I knew what it meant and even more so when I got to Denmark and it’s a World Cup qualifier - different ball game altogether. So Glenn, for me, who has been probably the star man in three or four of our games, he has the edge on those, without any doubt.”

Whelan’s drop to League One where he now plays with Fleetwood after having parted company with Hearts, is not, McCarthy says, a major concern, but the relative lack of game time others are getting is, he admitted, more worrying.

Shane Long and James McCarthy could return when he names his squad on March 16th if they are featuring regularly for their clubs but his focus is, first and foremost, on the likes of David McGoldrick and Darren Randolph, key figures for his side through the group stage games.

“It affects them that they’re not playing,” he said, “but David McGoldrick was expecting to be back in training and looking on the positive side, once he gets back in, which he will, he’ll have had a great rest and he’ll be flying come March. I’d like Darren to be playing too of course but even if he’s not I might make an exception for him because he’s the best we’ve got by a stretch.”

1 ‘Manchester United are lucky to have you’: Klopp responds to Donegal schoolboy’s letter
2 Six Nations: Ireland v England all you need to know guide
3 Iain Henderson ruled out of Ireland’s Twickenham visit
4 Liam Toland: Larmour can distract England while others flourish
5 Eddie Jones: back three will deal with Irish aerial threat
Real news has value SUBSCRIBE
Crossword Get access to over 6,000 interactive crosswords