Rangers hold on against Villarreal at Ibrox 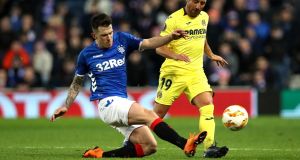 Ryan Jack gets to the ball ahead of Villarreal’s Santi Cazorla. Photograph: Ian MacNicol/Getty

Analysis of this game must always be tempered by the fact Rangers played the second half with 10 men. With that in mind, Villarreal will be upset with just a point. Their territorial dominance ultimately amounted to very little. Steven Gerrard thereby retains a live hope of taking Rangers to the Europa League’s knockout phase in his first season as a manager. What his team lacked in quality, they made up for with belligerence.

Rangers’ European exploits have required considerable energy if nothing else. This marked their 13th game in the Europa League this season, partly the consequence of an impressively negotiated qualifying campaign. Gerrard insisted before kick-off that being in with a chance of progression from Group G represented better than onlookers would have thought possible. Rapid Vienna’s defeat of Spartak Moscow in many ways simplified Rangers’ task for their closing two group games.

Villarreal lie 16th in La Liga and have had recent troubles in Scotland, but their domestic form had been much-improved. In 14 matches at home in this campaign, Rangers were yet to be beaten. On the road, they have been occasionally unconvincing but their aggressive approach here has routinely paid off.

Rangers came within a poor shot of being afforded the perfect start. Scott Arfield had more time than he realised from 12 yards, with the former Burnley midfielder finding the hands of Andrés Fernández rather than – as seemed entirely feasible – bulging the net.

The visitors’ response was immediate; Carlos Bacca narrowly failed to connect with a deflected cross from Karl Toko Ekambi when only the slightest of touches would have beaten Allan McGregor.

Villarreal’s propensity to pass their way into trouble was a first-half theme. One of their centre-backs, Álvaro, was guilty of this to such a glaring extent it was legitimate to ask what had happened to him between leaving Spain and touching down in Glasgow.

Rangers’ own shortcomings in possession, albeit nowhere near as stark, rendered the opening 45 minutes scrappy if ghoulishly entertaining.

Connor Goldson’s scooping of the ball over the bar on the half-hour proved the closest Rangers came to breaking the deadlock. A terrific McGregor save from the marauding Ekambi within a minute of that chance was an opportunity the visitors hoped they would not rue passing up. Ekambi was spectacularly denied by the same man before the interval, this time after Jon Flanagan had squared the ball straight to the forward.

The closing seconds of an increasingly ill-tempered first period led to Rangers being reduced to 10 men. Daniel Candeias received a second yellow card for his part in a foul – Alfredo Morelos was also involved – on Santiago Cáseres. That a supporter entered the field during the ensuing melee will inevitably afford Rangers unwanted Uefa attention.

Gerrard had made plain his anger regarding Candeias towards the officials. Given his existing caution, Candeias would have better advised staying away from the incident that triggered his early exit.

Villarreal’s numerical advantage was one they were keen to press home. That much was demonstrated during the second half’s early exchanges, McGregor batting away a long-range effort from Mario Gaspar. With more than half an hour to go, the flow of traffic rather suggested Rangers would be relying on their keeper to a significant extent.

That said, Gerrard’s hope could be derived from the lack of conviction demonstrated by the visitors. The point was not lost on Javier Calleja who introduced Santi Cazorla as a substitutes. Gerard Moreno also appeared as Calleja sought to spice up a timid attack.

Salvation almost arrived for Rangers via Middleton, who was correctly adjudged to be offside when turning the ball home.

Boosted by this attack, Rangers tried again via the substitute Kyle Lafferty, whose shot was tipped over. Villarreal returned to huff and puff mode; McGregor would not be beaten. A tired, occasionally despairing Rangers, clung on.

1 Tipping Point: DeChambeau’s transformation raises questions, but who will ask them?
2 Monica Seles: The warrior queen who could have been the best ever
3 Patrick Mahomes reported to have signed 10-year $400m deal with Chiefs
4 Lewis Hamilton: I was ‘silenced’ over Colin Kaepernick
5 Ken Early: Resurgent United can be the top team – in Manchester
Real news has value SUBSCRIBE
Crossword Get access to over 6,000 interactive crosswords