Prevalence of dementia in ex-footballers to be studied

Study will compare physical and mental health of 15,000 ex-pros with general public 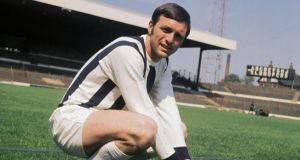 Jeff Astle: was famed for his prowess at heading the ball and died of a degenerative brain disease traditionally associated with boxers. Photograph: A Jones/Express/Getty Images

A Glasgow-based research team will investigate whether former footballers are more likely to suffer from dementia later in life than the general public.

The new study, which is titled Football’s Influence on Lifelong Health and Dementia Risk (Field) will start in January and will be led Dr William Stewart and colleagues at the University of Glasgow and the Hampden Sports Clinic.

The research, cofunded by the English FA and the Professional Footballers’ Association, has been two years in the planning and will look at the physical and mental health outcomes of approximately 15,000 former professional footballers and compare them to the wider population.

This announcement comes after wide criticism of the football authorities’ failure to address this question sooner, as it has been on the national agenda ever since former England and West Brom star Jeff Astle died in 2002 with what the coroner described as an “industrial injury”.

Astle was famed for his prowess at heading the ball and died of a degenerative brain disease that was later identified – by Dr Stewart in 2014 – as chronic traumatic encephalopathy, a condition traditionally associated with boxers.

Since Astle’s death, the families of dozens of other ex-footballers, including several from England’s 1966 World Cup-winning squad, have come forward to reveal their stories of dealing with dementia and related illnesses.

Previous research efforts have had mixed results, and if this study does establish that ex-footballers are more vulnerable to dementia-like illnesses, further research will be needed to find out why and what can be done to mitigate the established risks.

In a statement, Dr Stewart, who is based at Glasgow’s Queen Elizabeth University Hospital, said: “In the past decade there have been growing concerns around perceived increased risk of dementia through participation in contact sports, however, research data to support and quantify this risk have been lacking.

“Through the Field study we hope to be able to provide some understanding of the long-term health impact of football within the next two to three years.”

FA chief executive Martin Glenn said this research will be “one of the most comprehensive studies ever commissioned into the long-term health of former footballers” and said the governing body “felt compelled” to find out if there are any “potential risks” to playing the game.

Gordon Taylor, Glenn’s counterpart at the PFA, said the players’ union “is and always has been committed to a duty of care for all past, current and future members” and claimed it had lobbied for the football authorities to join the PFA in taking action, just as it had done with concussion and heart screening.

With the FA and PFA providing the funds, sports concussion research charity the Drake Foundation will oversee the study, adding another level of independence.

Dr Stewart was one of the founder members of the FA’s expert panel on concussion but stepped away during the tender process to avoid any conflict of interest.

The panel’s chair, Peter Hamlyn, a spinal and neurological surgeon, said: “We have focused our initial endeavour on answering whether footballers are indeed more likely to suffer long-term brain injuries than the general population.

“Only by conclusively knowing this can we make progress. We hope this new study will provide a much-needed leap forward in our understanding.”

Kildare chairman calls on government to remember importance of sport 05:41
Stuart Lancaster knows Leinster’s strength in depth will be key in busy schedule 05:30
Corofin’s quality won’t have chance to shine on biggest stage 05:00
Heroic insanity: When Michael Dunlop raced home in memory of his father 05:00
Gerry Thornley: Consistent trailblazers New Zealand once again ahead of the posse 01:00

1 Gerry Thornley: Consistent trailblazers New Zealand once again ahead of the posse
2 Ken Early: PSG would be sensible final move for Ronaldo
3 Heroic insanity: When Michael Dunlop raced home in memory of his father
4 My sporting disappointment: Jimmy White and the elusive World Championship
5 The Offload: Joe Schmidt the influencer is due a second act
Real news has value SUBSCRIBE
Crossword Get access to over 6,000 interactive crosswords