Thibaut Courtois holding off on contract talks amid Spanish interest 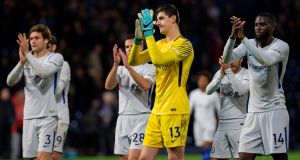 Chelsea’s goalkeeper Thibaut Courtois: although he is happy at Chelsea and willing to sign improved terms, he has regularly expressed his fondness for life in La Liga. Photograph AFP Photo

Thibaut Courtois does not expect discussions to resume over a new contract at Chelsea until the end of the season, when he will be entering the final 12 months of his deal. The previous round of talks in May failed to reach an agreement.

The goalkeeper, who spent three successful years on loan at Atlético Madrid after joining Chelsea from Genk, has been an integral part of the team who have won two Premier League titles in the past three seasons. His agent, Christophe Henrotay, held talks with the champions towards the end of last season, seeking to take the Belgian’s wages closer to the £200,000 a week level enjoyed by Eden Hazard at Stamford Bridge and another of the division’s elite goalkeepers, David de Gea, at Manchester United.

Although Courtois – who kept 16 clean sheets in the league last season – is happy at Chelsea and willing to sign improved terms, he has regularly expressed his fondness for life in La Liga, where his situation continues to be monitored by a number of clubs, notably Real Madrid. His former girlfriend has returned to Spain with the couple’s two children.

Chelsea are well aware of interest in him from Spanish clubs, and will be anxious to achieve a positive resolution before the player goes into the final year of his deal, potentially damaging his value and their bargaining position.

“The most important thing is to perform well for myself and the team,” said Courtois before the Champions League game against Qarabag. “Regarding my contract, that’s something where Chelsea must deal with my agent. I don’t think there have been any new developments. We have so many games at the moment, and I prefer to focus on the team’s matches, my own performances, and there will be time enough towards the end of the season to have talks.”

Courtois will seek to smooth Chelsea’s progress into the knockout phase with victory in Azerbaijan on Wednesday, with the visitors’ squad having stuck to Greenwich mean time in an attempt to overcome the four-hour time difference with one eye on Saturday’s daunting trip to Liverpool.

The players took the six-hour flight on Monday, training in Baku on the eve of the tie, and will make the 2,500-mile return journey immediately after the match. They do not expect to arrive back in London until around 5am.

That has dismayed Antonio Conte, who aired his frustration earlier this season when his team were asked to play Manchester City on the Saturday after a game at Atlético on the Wednesday night. This week’s scenario is arguably more brutal – Liverpool play Sevilla on Tuesday – given the travelling involved, with Conte again asking questions of the Premier League and television companies involved in fixture scheduling.

“I’m a bit surprised because it’s the second time this situation has happened,” he said. “The first time it was the same: when we played on Wednesday away at Atlético Madrid and came back to London at 5am and then, on the Saturday, we played Manchester City, who had played on the Tuesday. Now this. It will be very difficult for us to recover. Whoever prepared the fixtures for the league must pay great attention. I don’t like to find excuses, but sometimes I think it’s right to give respect for our job.

“I’d like to underline I’m talking for all the teams who are playing in the Champions League, not just for Chelsea. At this moment England needs to try to understand this problem and change something.

For a lot of time there hasn’t been an English team playing a final in the Champions League. Why is this? The teams are very strong, and every team has the possibility to go through to the Champions League final. Whoever prepares these fixtures must pay great attention. We are doing our job but we want also a bit of respect for our job.

“We won’t be back until 5am, but then to prepare the game in only one day will be very difficult. But this isn’t the first time. Imagine playing against Manchester City in the same condition? If we’d won the game, the gap would only be three points now. If we’d drawn it, it would be six points. Now it’s nine points.

“Now there is another big game against Liverpool. So if you ask me if we’re ready to catch up City, whoever prepares the fixtures must change something.”

Conte may seek to rest some players before the game at Anfield and will consider whether N’Golo Kanté, Gary Cahill and Tiémoué Bakayoko are required to start in Baku’s Olympic stadium.

“It’s normal to have rotation for the team but I trust all my players,” he said. “I have a squad with great maturity. My players know very well the importance of the game against Qarabag. Don’t forget that Qarabag have drawn twice against Atlético Madrid, and Roma struggled a lot before winning here against them. We have great respect for this team. If someone thinks this game will be easy, it won’t be.” – Guardian Service