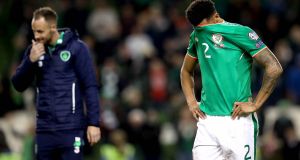 Modern football tends to draw permanent conclusions from temporary situations, which leads to extremist reactions. But, it is the sport we know and love.

Football can be filthy and foul-mouthed while also joyful. It can also be filled with despair and anger. Being a football fan is different now. What does it now mean to support a team? How should we feel about the players chosen to represent us and our country?

After the Republic of Ireland game on Tuesday, we were all mad. We all tried to find a scapegoat. A friend of mine who is an Arsenal fan declared it was Arsenal always wanting to make him miserable. First Thierry Henry did that to him in 2009, then it was Arsenal’s rival Christian Eriksen. My friend fully believes he can never get away from the wretched clutches of Arsenal.

Others, sadly, take a much more sinister view. The internet has always been a place where vile abuse can be thrown at people. Trolls who used to be voiceless now have a place to vent and take their anger. Even worse, they can now channel that anger directly at that person.

When James McClean won International Player of the Year, I was hopeful he’d channel his inner anguish and turn it into a Father Ted golden cleric speech, but instead, he used it to highlight a major issue in sport – racism.

“Everybody watched the game, and it was poor, we know that. But some of the comments afterwards, which my Instagram post was about, went beyond football. One player, in particular, was told to go and play for Jamaica. Make of that what you want.

“It really upset him. My comments weren’t based on football, they were more personal. That’s for a player who has been a good servant to his country, and it cut deep. That player was in tears, by the way. You’ve just missed out on the World Cup and then to have that . . . ”

It did not take a genius to figure out who the player mentioned above was. Twitter and all types of social media give people an ego boost behind the anonymity. People feel invincible and untouchable since they can hide.

I used to always wonder what the point was. I get it, you’re angry or upset, we all were, but I didn’t expect the greatest fans in the world to think “best go on here and tell him he should go back and play for Jamaica. Lad cost us the World Cup”.

It is a thought process I genuinely do not understand. The guys behind the tweets get an attention-seeking pleasure from it that nobody should ever get.

Racism in football is not new. Extremism in fans is not new. Scapegoating is not new. What is new is the ability to express yourself on a platform that is used and seen worldwide and direct that abuse at a player.

Yes, it was incredible James McClean had yet another heart-on-his-sleeve moment. He raised awareness about an important issue that Irish people struggle to grasp sometimes. McClean showcased the ugly side of football we have all suppressed. And more importantly, from a coaching perspective, he highlighted that nobody within the Irish dressing room was blaming them.

But this is racism in football. A place where macho masculinity is embraced and win at all costs is encouraged, even if it means spewing vile things. And it’s also a place where certain things can go unpunished if a player does not speak up. In what world would a player speak up for it to be used against him a whole week later.

It’s time we understand that footballers and sports people are human too. The jersey or money or fame does not shield them or stop them from having feelings. These objects are not Captain America’s shield or a defence mechanism. The PR team, if you’re lucky to have one, can only filter some of the negative words.

But, underneath all of this is a question of priorities and morals. Are we actually going to start taking this stuff and, in particular, racism seriously?

Are we genuinely committed to giving racism the red card, or only when it’s in a nation far away from where we can hop on our moral high horses and say only backward countries do this?

Are we actually going to stand for something here?