How has Marco Silva become the Premier League man in demand?

After only 13 Premier League wins, Watford’s boss is man of the moment for faltering clubs 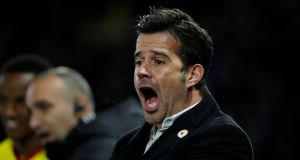 Marco Silva’s Watford have enjoyed a very good start, but not much more than that so far. Photograph: Reuters

Ambitious, astute, broodingly handsome, compared, inevitably, to Jose Mourinho: Portugal’s latest managerial tyro is, according to a report in these pages, “the most sought after young manager in Europe”. Best of all he is also the first in a line, the new breed of short-stay super-coaches vaulting their way from domestic success to the very top of European club football. Yes, however you look at it Andre Villas-Boas is clearly the future of European football.

It is of course perverse to compare the Premier League’s ongoing, if temporarily stalled state of Marco Silva-related fever to the excitement around Villas-Boas seven years ago. Back then there was a similar cooing over AVB’s “philosophy”, his drive, his alchemical eye for detail. Here he comes: football’s own preppy wonder-geek, a vision of the thrillingly wised-up future.

At Chelsea it quickly became clear the one quality Vilas-Boas lacked was Silva’s obvious sure-footedness, his unshakable conviction, the ability to manage his players and his board. Villas-Boas looked bemused at his Stamford Bridge unveiling, fretting around the stage in shirtsleeves looking as though he might have come to fix the photocopier – an impression that never quite disappeared.

Silva’s route to the Premier League has been different, blazing his own outsider trail into the top tier in Portugal. Silva is older, tougher and tasked with a very different kind of job. And yet there is still something similarly giddy about the way his talent is being handled right now by the Premier League, like a prize steak being tossed from one hungry pair of jaws to the next.

Against this background the news Watford have refused to let Silva leave to manage Everton after just 12 games in charge is to be welcomed. Everton would have been Silva’s third Premier League unveiling in 2017 and his fifth managerial job in the past three years. It is the kind of peripatetic existence that usually coincides with tumbling fortunes, a familiar disappearance down the plughole of ambition and stalled starts. In this case Silva has been headed the other way, a man vaulting upwards from a standing start, constantly scrabbling for the next handhold.

Even in a league prone to volcanic fits of enthusiasm this is something new. To date Silva has managed 13 league wins in England. On the back of this he appears to have been seized on as the answer to pretty much every managerial question the Premier League might care to ask, a quick fix for every failed regime, every bungled appointment, every bodged recruitment pattern.

Which is fine in outline, unless you happen to be Hull City, currently 20th in the Championship. Or Watford, on the verge this week of seeing their plans for the season ripped up in mid-November. Or indeed for Marco Silva himself.

The manager’s role may have changed, becoming more of a gig economy affair, with even the top men promising no more than three years. Similarly the Premier League has often been accuse of eating talent, of exhausting promise with its basic hunger and neediness, its constant flux. But talent, team-building, opportunity: these are all still precious things, in need of nurture and care. This applies to managers as much as players. Silva clearly has talent. The question is whether he will be allowed to express it.

It is important to be careful here. To raise any kind of doubts about Silva’s space-rocket trajectory is to risk aligning yourself with the infamous Soccer Saturday segment shortly after his appointment at Hull.

On that occasion a visibly bemused Paul Merson asked the question on everyone’s lips, namely: “Why is this geezer any different to Gary Rowlett [sic]?” An ashen-faced Phil Thompson, not angry, just very sad (and also, let’s be honest, angry) suggested appointing “somebody like this” was “hugely embarrassing”. “There are plenty of people out there who know what it means to dig in,” Thomson pointed out. “He’s not got a clue.”

How we laughed at the proper football men, wreathed in their Brexit-ball confusions, as Hull dug in, taking 21 points from 18 games. But they did also go down, quite comfortably in the end.

Similarly Watford have played some good stuff this season, winning five games. But Watford had also won five matches at the same stage last season. They are four points below Burnley and two above Brighton. They spent €61 million over the summer. It’s a very good start but not much more just yet.

This is not to denigrate Silva’s obvious gifts, which have been clear since the transformation of Estoril, one of the mini-miracles of recent years in European club football. Silva had been a largely undistinguished player at the club. He became manager shortly after his retirement, around about the time AVB was stumbling through the doors at Chelsea, and took a tiny resort-town club from the lower end of the second tier to fourth in the Primeira Liga.

His methods were always likely to appeal to ambitious owners. Silva likes to pour his energies into freeing up the talents of players released or rejected elsewhere, finding the value and forging a fierce sense of instant loyalty.

His teams have tended to win away from home, often at the bigger clubs, and to take pride in their fearlessness. Estoril handed Porto their first domestic home defeat in seven years.

Olympiakos beat Arsenal at the Emirates, which really did feel like a shock at the time.

Earlier this season he did something startling at Swansea, anticipating Paul Clement’s half-time changes and pre-empting them with matching tactical tweaks of his own, successfully as it turned out. Curtis Davies has described Silva physically moving his players around the training pitch, demanding an absolute precision in every phase of play, persuading his players to buy into this level of detail through force of will and personality.

It is hardly surprising this rare gift for instant team-building should have a catnip effect on the Premier League, a place where the next guy is always the best guy, where quick fixes are the only fixes. The only real surprise is it’s taken us this long to find a Silva-type figure, the middleweight miracle-man, oozing Euro-cool and bolt-on creativity, here to solve, and satisfy and set instantly in order.

For all the Soccer Saturday bile, young, garlanded overseas coaches are a relative rarity. Mourinho had just won the Champions League when he pimp-rolled into Stamford Bridge. Skip past AVB, currently chasing Chinese FA Cup final glory with Shanghai SIPG, and after that you’re looking at Mauricio Pochettino as the real trailblazer when it comes to young, highly rated young European managers getting an instant break in the Premier League.

All of which might explain the disorientating excitement over Silva, who may or may not be at Watford next season. If he can be persuaded to lay his hat for more than a single season for the first time since Estoril, watching him apply his talents to a slightly longer-term project should make a fascinating spectacle. – Guardian service