Chris Coleman: ‘I’m lucky to be in charge of Sunderland’ 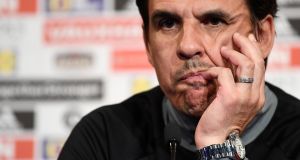 Chris Coleman quit as Wales manager on Novemnber 17th to take over at Sunderland after he failed to steer his country to the World Cup. Photo: Franck Fife/Getty Images

Chris Coleman considers himself “lucky” to have been offered the Sunderland job despite inheriting a club engaged in a desperate fight to avoid relegation to League One.

Eyebrows were raised when it emerged the 47-year-old, who guided Wales to the semi-finals of Euro 2016, had accepted a post which has ultimately defeated the likes of Martin O’Neill, Dick Advocaat and David Moyes in recent years.

But despite his profile having risen markedly as a result of his success with his national team, Coleman insists he was not tempted to wait for an offer from a Premier League club after deciding the time to quit the Wales post had come.

“I said that when I took my last job that the challenge was tough because of the circumstances, replacing my friend Speeds (Gary Speed)”, Coleman said at his first press conference as Black Cats boss on Monday.

“Many managers go throughout their career without managing a Sunderland, regardless of where it is. I might have gone through my career as well... I think I’m lucky to sit here and be in charge of this club.

“Yes, we’ve got to push it forward. It’s a massive, massive challenge, but one I’m ready for, totally committed to and excited about.

“You take a job and think you can affect the situation. That’s what you do. You’re always optimistic.”

Coleman’s comments came as news of Tony Pulis’ exit from West Brom was announced, creating a new vacancy for which he would undoubtedly have been considered if still available.

However, Sunderland’s size and history meant the opportunity to make a difference at the Stadium of Light was one he could not resist.

He said: “If a Premier League job had come up, it would have been with a struggling club, that’s normally how it works. Let’s say I take a Premier League club and they are relegated, then we’re in the Championship and I could have bypassed this one.

“I look at this club and I know if it’s not me, somebody will do it. I promise you, I do.

“Three or four years ago, I would never have got this job. I had a good time with Wales and I’m deemed fit to get a job like this. I’m absolutely thrilled to be here.”

Coleman, who will send his bottom-of-the-table side into Sky Bet Championship battle with Aston Villa on Tuesday evening, was reminded that 45 years ago to the week, Bob Stokoe arrived at the club and within six months, had won the FA Cup.

He replied with a smile: “That’s on the menu, actually, and maybe the Champions League next year.”