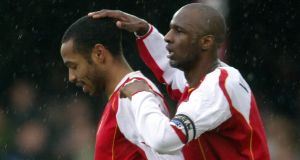 When Thierry Henry and Patrick Vieira met in London over Christmas, using a short break in the Ligue 1 schedule to take coffee in the way they always have, both men knew they had to pick their moments carefully nowadays. One of modern football’s powerhouse friendships, an awesome concentration of sheer accomplishment, must be put on hold twice a year from now on and today they will discover how that feels.

Wednesday’s 108th Derby de la Côte d’Azur is a significant staging post in their careers and, while their bond is rooted in years of success on the pitch, a sense of mutual adversity colours their first encounter as managers of Monaco and Nice.

“We’re both really excited about it,” Vieira said on Tuesday, capturing the sentiment of last month’s chit-chat. But he allowed himself a smile when the notion of feeling sympathy with Henry, whose Monaco side sit second from bottom, was offered.

Vieira’s spell at Nice has begun in stately fashion but his feeling of serenity was interrupted last week when Jean-Pierre Rivère and Julien Fournier – the club’s president and general manager respectively, both credited with his appointment – announced their impending departures. The reason given was “divergences” with Nice’s Sino-American owners and, with the team looking to push on from eighth place, the timing could hardly have been worse.

Vieira said the difficulties at both clubs made life “really quite interesting” for two such callow coaches.

“All the big issues he can find at Monaco, or I can find here at Nice, make us grow and create experience that we will use for the future,” he said. “You have some up and downs, and it’s about how you learn from those situations and improve yourself. It’s a tough situation here for me, knowing in the last couple of days that the chairman and [general manager] will leave, because they were the ones that brought me here. But I’ve been in the game long enough to understand things can sometimes go in a different way to what you’ve planned.

“I would say Thierry, on the other side, has had different issues. But I believe he will find a way to get the best from his players and be successful.”

There was no avoiding the fact that he sounded worried. Nice are likely to appoint the Barnsley chief executive, Gauthier Ganaye, to a senior role and Vieira hopes the matter is clarified quickly enough to allow him leeway in the transfer market.

That is something Henry, who has made scant difference to a team racked with injuries and feeling the bite of summer departures, has been granted recently. Monaco have fallen far since Leonardo Jardim, whom Henry replaced in October, led a buccaneering side to the Champions League semi-finals in 2017 and the cavalry are arriving.

Cesc Fàbregas made an impressive debut in Sunday’s encouraging draw with Marseille, recovering from a slow start to pull the strings. Henry cooed over his new recruit on Monday, recalling the day a 16-year-old Fàbregas first trained against Vieira and Gilberto Silva at Arsenal. “They didn’t see the ball, and they didn’t see him either,” he said.

Fàbregas will escape Vieira’s view again on Wednesday, but not for the reasons Henry would wish. This match had been scheduled for December 7th, only to be postponed because of the Gilets Jaunes protests that took place across France. Ligue 1 clubs are barred from fielding players who were not registered for the original game; Fàbregas will join fellow newcomers Naldo and Fodé Ballo-Touré in the stands and Henry, whose team are yet to win at home this season, will have to get a tune out of the players that have flailed so far.

This part of the world has never seemed the most obvious school of hard knocks but the pair’s formative years, Henry at Monaco and Vieira to the west at Cannes, taught them well. The derby’s idyllic setting, the clubs separated by a 20km stretch of coastline that has seduced dreamers and romantics for centuries, belies the gravity of the task but both managers appreciated the joy of marvelling at life’s circularity.

It is reality now and, the next time they sit down in the city that became their adoptive home, that 20-year relationship will have long since entered uncharted territory neither could have imagined. – Guardian service