Arsenal goalkeeper Petr Cech to retire at end of season 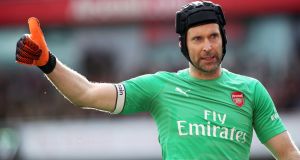 Arsenal goalkeeper Petr Cech will retire at the end of the season. Photograph: PA

Arsenal goalkeeper Petr Cech announced on Tuesday his retirement at the end of the Premier League season after 20 years as a professional and winning everything in club soccer.

One of the world’s great keepers, the 36-year-old joined the Gunners from London rivals Chelsea in 2015 and holds several Premier League records, including the most clean sheets (202 in 443 appearances).

“It has been 20 years since I signed my first professional contract, so it feels like the right time to announce that I will retire at the end of this season,” the Czech said on Twitter.

“Having played 15 years in the Premier League, and won every single trophy possible, I feel like I have achieved everything I set out to achieve,” he added.

“I will continue to work hard at Arsenal to hopefully win one more trophy this season, then I am looking forward to seeing what life holds for me off the pitch.”

Cech started the season as Arsenal manager Unai Emery’s first choice but lost out to new signing Bernd Leno after he suffered a hamstring injury in September.

The four-times Premier League Golden Glove winner has been restricted to Cup appearances since his return.

He also suffered a fractured skull while playing against Reading in 2006, leading to the tall Czech wearing protective headgear.

With Arsenal, Cech has won another FA Cup and two Community Shields.

Cech kept a total of 228 clean sheets with Chelsea in all competitions, before he fell behind Thibaut Courtois in the pecking order.

He still holds the Premier League record for most clean sheets in a season (24) and went 1,024 minutes without conceding in 2004-05, a benchmark that has since been surpassed. He was capped 124 times by his country.

Arsenal remain in contention for the FA Cup, although they host in-form Manchester United in the fourth round on January 25th, and the Europa League.

The North Londoners are fifth in the Premier League, ahead of United on goal difference but 16 points adrift of leaders Liverpool.

“For your consummate professionalism, for being the perfect role model, for the 50 clean sheets, for your honesty, your integrity and for your inspiring work with @AFC_Foundation, we want to say... thank you @PetrCech,” Arsenal said on Twitter.

1 Trump endorsement by Jack Nicklaus leads to avalanche of dismay
2 World Handicap System: What is it? How does it work? Will my handicap change?
3 England lay down marker for Ireland after bonus point win in Rome
4 Galway expose Wexford’s lack of Plan B to reach Leinster final
5 Dublin return from the dead to give Kilkenny a scare in Croke Park thriller
Real news has value SUBSCRIBE