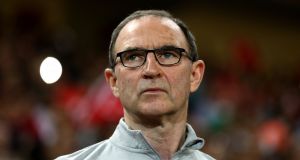 Martin O’Neill has been named as the new Nottingham Forest manager. Photograph: PA

Nottingham Forest have confirmed the appointment of former Republic of Ireland manager Martin O’Neill as the club’s new manager. In a statement, on the club’s website, there is no mention of whether Roy Keane will be working alongside the 66 year-old. Although there is no confirmation either of the contract, it is believed that the Irishman has been given an 18 month deal.

O’Neill’s return is likely to prove popular amongst the majority of the club’s supporters. He made 371 appearances for Forest over the course of the decade he spent there, scoring 62 goals and helping the team, then managed by Brian Clough, to a league title, two European Cups and a number of other trophies.

He has subsequently enjoyed a highly successful career in management, most obviously at Wycombe Wanderers, Leicester City and Celtic although his last two jobs have ended badly with Sunderland dismissing him in 2013 after a run of eight games without a win that left the club in serious danger of relegation and the FAI losing patience after a run of one win in 11 that included a couple of hefty defeats and relegation in the inaugural Nations League.

O’Neill will take charge of Forest for the first time this weekend when the team takes on Bristol City. He is clearly seen by the club’s Greek owner, Evengelos Marinakis, as the man to get the club back into the Premier league after an absence of 20 years.

Aitor Karanka departed last week after a poor run of results left the team four points off the play-off places. O’Neill inherits a squad that had been extensively rebuilt by the Spaniard who had signed 24 players in the last two transfer windows.

Last weekend O’Neill’s successor in the Ireland job, Mick McCarthy, confirmed that he had spoken with Daryl Murphy, one of the small contingent of Irish players currently at the City Ground, about an international return.

One of O’Neill’s backroom staff with Ireland, Steve Guppy, is expected to follow him to the Championship outfit while Roy Keane was reported on Monday to have been in talks with the club about the assistant manager’s job.