Harry Kane set for at least a month on the sidelines 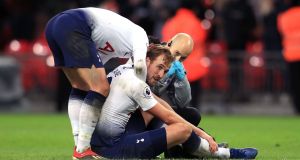 Tottenham will wait for swelling to go down on Harry Kane’s ankle injury before being able to find out the full extent of it. Photo: Mike Egerton/PA Wire

Harry Kane fears he may be absent for at least a month as Tottenham wait for the swelling around the England captain’s injured ankle to subside before scanning the joint.

The striker hobbled away from Wembley on Sunday after hurting an ankle towards the end of the 1-0 defeat by Manchester United.

The area is too swollen for Spurs to examine properly and ascertain the extent of the damage. But, while the club are understandably reluctant to put a timescale on his anticipated absence, Kane is concerned he may not be fit for the first leg of the Champions League last-16 tie with Borussia Dortmund next month.

The 25-year-old has endured ankle problems in each of the last three years, missing seven weeks in the autumn of 2016, and, armed with that experience, it is understood he is braced for an absence of at least four weeks. That would rule him out of the second leg of the Carabao Cup semi-final against Chelsea next Thursday; Spurs also play four Premier League matches and an FA Cup fourth-round tie at Crystal Palace in the next month.

Dortmund visit Wembley on February 13th with the return fixture in the first week in March.

The impact of Kane’s injury is compounded by Son Heung-min’s departure to play for South Korea in the Asian Cup, where his involvement could extend until the end of January. “These two guys are just massive for us,” said Jan Vertonghen. “Especially over the last couple of months they’ve been immense. We hope they’ll both be back soon. It’s one of those things but the other guys have to stand up now.”

Spurs are investigating an alleged incident of racism directed at Son by one of their own supporters on Sunday, having been alerted to an incident by a season-ticket holder.

In Kane’s absence Mauricio Pochettino has ruled out turning to Vincent Janssen, who is not in his plans, but will be left with Fernando Llorente – who has attracted interest this month from his former club Athletic Bilbao – and Lucas Moura as striker options. The Brazilian may recover from a knee injury to face Fulham on Sunday.

“We all know how important Harry is in our team but he is not all of our team,” said the Spurs captain, Hugo Lloris. “Football is about the team and every player is ready to help the team. In football during the season you have ups and downs and you have to always adapt to those, and we will see about ‘H’.

“It is better when you have all your best players on the field but that can happen here or it can happen at other clubs. With or without him we will see how we do.”

The midfielder Mousa Dembélé has travelled to China to complete an £11m move to Guangzhou R&F and end a six-and-a-half-year stint with Spurs. The 31-year-old has not featured since suffering an ankle problem in November. Moussa Sissoko, who picked up a groin injury against United, is being assessed. – Guardian service

1 Jack Nicklaus’ Trump endorsement leads to avalanche of dismay
2 World Handicap System: What is it? How does it work? Will my handicap change?
3 Six Nations - France v Ireland: Kick-off time, TV details, permutations, team news and more
4 Here is your handy guide to sport on television this week
5 Return of Conor Murray’s box kicking could exploit French vulnerability
Real news has value SUBSCRIBE