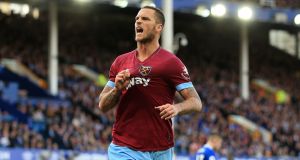 Marko Arnautovic: it is understood he would earn about £40 million over his four-year contract under the offer. Photograph: Peter Byrne/PA Wire

Marko Arnautovic wants West Ham to accept the £35 million (€39 million) bid from an unnamed Chinese club to allow him to “challenge for titles” but has been told he is not for sale.

The Austria forward moved to east London in July 2017 for £20 million, plus an additional £5 million in potential add-ons, and is West Ham’s joint-top scorer this season with eight goals in all competitions. Manuel Pellegrini on Thursday dismissed suggestions the 29-year-old could leave the club this month, but having admitted in November the forward would like to test himself in the Champions League, Arnautovic’s brother Danijel, who also acts as his agent, released a statement that asks for them to allow him to move to the Chinese Super League.

“West Ham bought Marko for peanuts. They paid £20 million for him, which is nothing in the current market,” read the statement. “They bought him to keep them in the Premier League last season, and he did that. He took every award at the club; best player, signing of the season and the players’ award.

“Now West Ham have a fantastic offer. It is close to double what they paid for him. He wants to go to a new market and challenge for titles. This is what he wants. It is his great desire that West Ham accept the offer from China. ”

Reports have stated the offer – which, it is understood, would mean Arnautovic earns about £40 million over his four-year contract, a vast upgrade on his current wage of £90,000 a week – is from reigning champions Shanghai SIPG, although their permitted allocation of three overseas players is filled by former Chelsea midfielder Oscar and his fellow Brazilians Hulk and Elkeson.

Pellegrini underlined his determination to keep Arnautovic before West Ham’s meeting with Arsenal on Saturday, with the club later issuing a statement that read: “Marko has a contract and we fully expect him to honour it. He is not for sale.”

It is understood West Ham will not consider selling him this month because of the difficulties they may face in replacing him. Arnautovic, whose contract expires in 2022, is believed to have asked to open negotiations over a new, improved deal if they will not allow him to leave. Stoke are also believed to have a sell-on clause that would entitle them to 20 per cent of any future transfer fee, with his contract due to expire in 2022. – Guardian