Tottenham’s Harry Kane out until at least early March 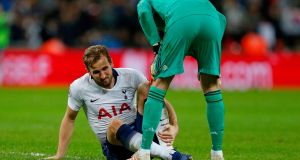 Tottenham Hotspur’s worst fears have been realised after a scan on Harry Kane’s left ankle confirmed he sustained ligament damage during the defeat to Manchester United, with the England captain not expected even to resume training until early March.

The striker had hobbled away from Wembley on Sunday after hurting the joint in a challenge with Phil Jones towards the end of the 1-0 loss and, while he had initially conceded he would miss at least a month in rehabilitation, medical tests on the ankle suggest his absence will extend further.

The forward was photographed on crutches and wearing a protective boot as he visited a Harley Street clinic in central London to be scanned on Tuesday morning with Tottenham later issuing a brief statement confirming the damage. The club are now resigned to being without their talismanic forward in both legs of their Champions League knockout tie against Borussia Dortmund and, should they progress beyond Chelsea, in the Carabao Cup final where Manchester City surely await.

The 25-year-old is no stranger to ankle problems having endured time on the sidelines in each of the last three years, missing seven weeks back in the autumn of 2016, after suffering injuries on the joint. Yet, with Spurs 1-0 up from the first leg of their Carabao Cup semi-final, his absence this time round is particularly untimely at a key stage of the club’s season. Indeed, Kane could miss at least 11 games while he undertakes his rehabilitation.

Mauricio Pochettino is already without Heung-Min Son potentially until the end of the month while he plays for South Korea at the Asia Cup, and has ruled out reintegrating Vincent Janssen into the first-team fold. That leaves Lucas Moura, who should return at Fulham this weekend after knee trouble, and Fernando Llorente – who had effectively been available for transfer – as his striker options for the foreseeable future. The club had not anticipated entering the market this month, and it remains to be seen if that policy shifts in the wake of Kane’s injury.

Spurs potentially have seven Premier League fixtures between now and the beginning of March, when their rivals Arsenal are due at Wembley, together with the awkward tie against the current leaders of the Bundesliga. They play the second leg of their Carabao Cup semi-final at Stamford Bridge next Thursday, with the final on February 24th. Given the cluttered schedule, Kane may not have been involved in the FA Cup fourth round against Crystal Palace. – Guardian service

1 Gordon D'Arcy: Ireland must go after victory by frightening France into mistakes
2 Henshaw the only change as Andy Farrell names Ireland team for Paris
3 Champions Cup draw: Irish provinces learn their opponents for this season
4 Cian Healy: ‘Realistically I got away with murder when I was younger’
5 Giovagnoli’s appointment at Dundalk ‘a great story’ says Arsenal boss Arteta
Real news has value SUBSCRIBE