Trent Alexander-Arnold facing a month on the sidelines 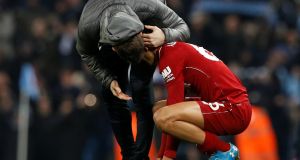 Liverpool have suffered another defensive injury setback with Trent Alexander-Arnold facing up to a month on the sidelines with a knee problem.

The 20-year-old sustained an injury during the warm-up at Brighton on Saturday. He was able to play the full 90 minutes of Liverpool’s 1-0 win but tests have revealed a minor ligament issue that is likely to rule out the right-back for around four weeks.

Alexander-Arnold’s absence represents a serious concern for Jürgen Klopp given the concentration of injuries to right-sided defenders. The Liverpool manager has been without Joe Gomez and Joël Matip for several weeks due to injury, although Matip is back in full training and in consideration for Saturday’s home game with Crystal Palace. Gomez is not expected to return until February.

Having allowed Nathaniel Clyne to join Bournemouth on loan this month Klopp’s options at right-back are limited. Alexander-Arnold, however, should miss only three or four league games with a four-week lay-off – Palace, Leicester, West Ham United and Bournemouth – and is expected back before the Champions League last-16 first leg tie at home to Bayern Munich.

Georginio Wijnaldum is also struggling with a knee problem following the Brighton victory and, though a doubt for the visit of Roy Hodgson’s side on Saturday, is not expected to be out for a prolonged spell.

Dejan Lovren was sidelined against Brighton with a hamstring injury and not expected to feature until Leicester’s visit on January 30th.