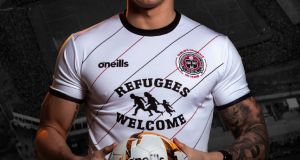 Bohemians’ away jersey for the coming season. Photograph: @bfcdublin

Bohemian FC have announced a partnership with Amnesty International in which it will highlight the plight of families in direct provision and seek to promote the campaign to end the system which is used to accommodate more than 5,000 refugees in Ireland.

The club will wear a jersey with an image of a family fleeing war on their away jersey for the coming season which, for them, kicks off at the weekend with a game against Shamrock Rovers at Dalymount Park. The shirt will also carry an anti-racism message. The entire venture is said to have been supported by the club’s main shirt sponsor, Des Kelly Interiors.

“We’re delighted to unveil this very special shirt,” said Bohemians director Daniel Lambert. “At the core of the Bohemian identity is inclusiveness and a desire to utilise football as a means to improve our society as a whole.

“This builds on a deep and lasting relationship we have built with the Movement of Asylum Seekers in Ireland (MASI) and through multiple engagements with people living in direct provision.”

“The system is fundamentally flawed,” he said, “trapping people for years in limbo and isolating them from communities in inhumane, institutionalised conditions. We know there are challenges like the current housing crisis, but this has been going on for 20 years through successive governments. We need a new approach, one that protects people’s human rights.”

Lucky Khambul of MASI said that the organisation was delighted with the relationship it has enjoyed with the club. “It is encouraging to see the club forge relations with asylum seekers who regularly attend matches and the team opening the stadium for us to use for events,” he said.